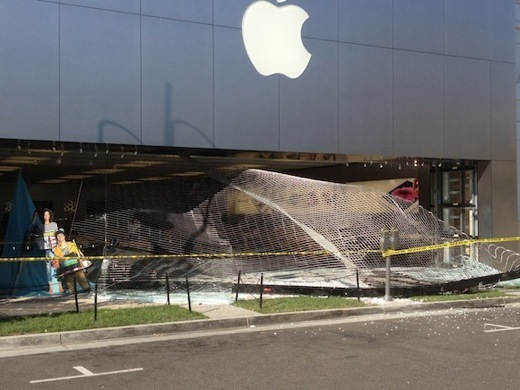 The Promenade Temecula Apple store in California was robbed last week in what seems to be a smash n’ grab attempt. Details were scarce at the time, but with the surveillance video below we learned that a BMW crashed through Apple’s front-plate glass of the store and the burglars within quickly grabbed a few iPhones and iPads.

Apparently the burglars expected the attempt to be much easier than what they had experienced. On their way out they quite some trouble bypassing Apple’s strong glass. It had to take them nearly a minute to back the BMW out of the store.

Police have since taken suspect Equonne R. Howard into custody held on a $600,000 bail. This is Howard’s third mark on his record; if the court finds him guilty he will spend a minimum of 25 years in jail.

How was he caught? Tech-Shizzle shares:

During the heist, the front license plate to Howard’s vehicle came off, and was laying on the floor of the Apple store. Howard went back to the store-apparently to retrieve the plate-where he was apprehended by Riverside Sheriff’s deputies. He had the key to the vehicle still in his pocket.

What people do these days for money is absolutely crazy. Howard probably tacked on more damage to his car than what he stole.

Apple recently launched its iPhone 14 series of devices, introducing the new 'Plus' model to the fold. The 6.7-inch device joined the standard iPhone 14 as part of the entry-level offering. However, prior to its official reveal, the iPhone 14 Plus looks to have been called the 'iPhone 14 Max.' According to Dutch blog iCreate (via...
Steve Vegvari
16 hours ago