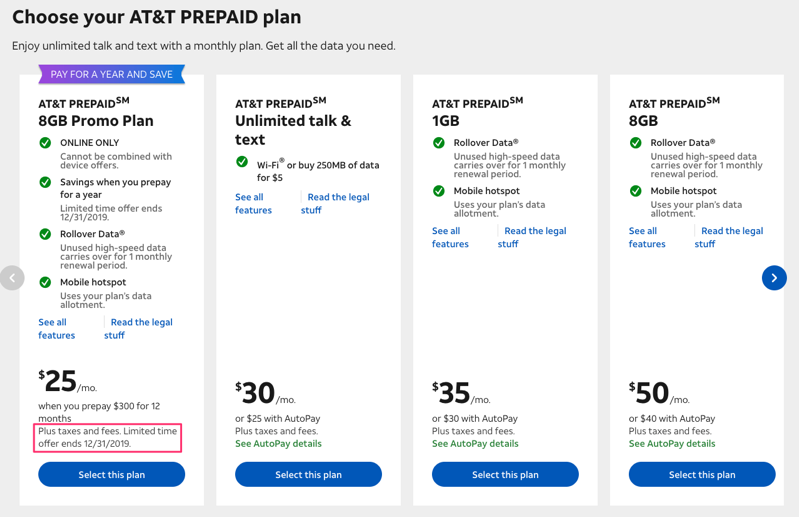 Back in August, we told you about an AT&T prepaid promotion offering a $25 USD plan with 8GB data, including unlimited talk and text, plus Canadian roaming data. The offer was set to expire on October 21, 2019, but has since been extended to December 31, 2019.

The AT&T 8GB promo offers you savings when you prepay $300 USD for 12 months. The offer also includes rollover data and mobile hotspot tethering.

Who is this plan for? If you’re visiting the United States more than once or twice per year, it may be worthwhile to consider this plan. iPhone in Canada reader Bruce jumped on this plan and told us the offer for new customers has since been extended.

With his work on a cruise frequently taking place in the U.S., Mexico and the U.S. Virgin Islands, it’s worked out quite well, he explains, versus roaming on a wireless plan from Rogers, Telus or Bell. “I’ve never had a problem with it,” said Bruce, talking about his experience with the AT&T plan.

When back in Canada, the plan roams on Rogers with LTE data speeds, while down in the U.S., the signal shows “5GE” (5G Evolution), or essentially AT&T’s branding of its faster 4G network at up to 2x faster LTE speeds.

Of course, with this AT&T prepaid plan you’ll have a U.S. number, as there’s no way to port your Canadian number over. AT&T terms also note, “if you use roaming data services in Mexico or Canada on a wireless carrier network other than AT&T, your data usage may be reduced to 2G speeds. For complete terms visit att.com/prepaidterms.”

If you’re willing to jump through some hoops and setup this AT&T prepaid promo, you’ll be saving on roaming data compared to a plan with Canada’s Big 3.