Customer Overcharged Caught in Crosshairs Between Bell and CRTC

Thanks to the new Wireless Code, your contract expires as soon as you cancel it, but your carrier can still bill you for the remaining days in your monthly billing cycle. A former Bell customer got billed for 11 days despite getting no service, the Star reports. 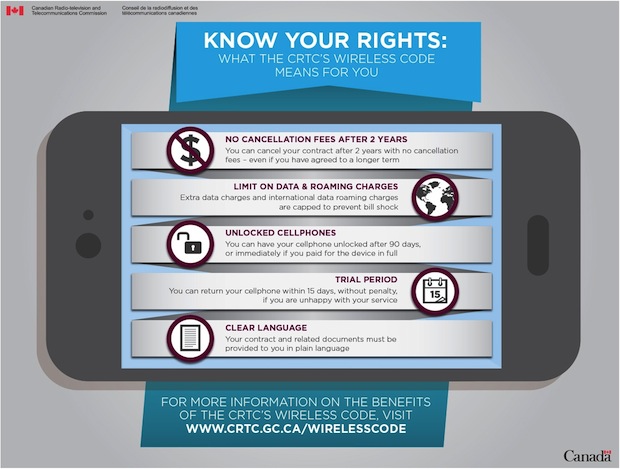 Stephen Sayers ported two phone lines to Cityfone, so he cancelled his contract on October 30. However, Bell billed him until November 11.

The situation points to a weak point in the Wireless Code: the Code does require carriers to cancel the contract as soon as the subscriber notifies them of their intent, but there is a tiny little problem here. As Bell spokesman Jason Laszlo pointed out in an email to the Star, service charges billed in advance are not refunded when you cancel your contract with the carrier. This seems to be Telus’ position on the matter.

In other words, you continue paying until the end of the billing cycle. The funny thing is, you pay for something you won’t get: aka no service.

In Sayers’ situation, Bell proceeded by refunding the amount as a goodwill gesture.

When the Star contacted the Commissioner for Complaints for Telecommunications Services (CCTS), commissioner Howard Maker said that the Code “prevails over the provider’s terms of service.”

“Our analysis would likely be that Bell did not have the right to charge Mr. Sayers for the period from Oct. 30 to Nov. 11,” said CCTS commissioner Howard Maker.
“Notwithstanding the suggestion in Mr. Laszlo’s email that Bell can charge this fee because its terms of service say that it can, the wireless code prevails over the provider’s terms of service.”

However, there is a catch: Bell didn’t violate the Wireless Code, since there is no paragraph requiring carriers to issue a refund for a partial month when they bill in advance.

Responding to Maker, Laszlo said Bell complied with the wireless code, which prohibits 30-day cancellation notices. “But as CRTC staff have said, the intention of the code is not to ensure that a customer receives a prorated refund for prepaid services.”

Videotron has aimed to address that matter with a request to the CRTC to stop Bell from billing customers after they cancel their contracts. Since this application will be heard later this year, customers will need to sort this out themselves with their carriers for now.