Rogers, Bell Cut Prices of Gigabit-Speed Internet By Up to 47% in Toronto and More [u]

According to a report by the Canadian Press, Rogers and Bell have slashed the prices of gigabit internet by up to 47%, in certain areas of Toronto, on top of supported areas in Ontario, New Brunswick and Newfoundland (updated).

Here’s what’s available until the end of July: 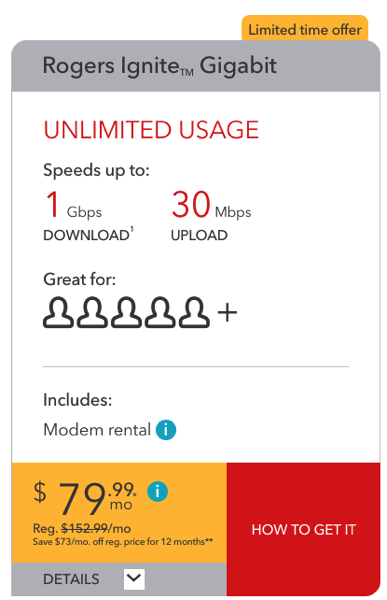 But according to IDC Canada market analyst, Emily Taylor, these limited-time promotions are one part of major internet service providers’ plans to nab customers for the long-term.

Gigabit-speed internet is rolling out in limited areas and these discounts can give customers a taste of higher speeds, seen as the future of home connectivity.

Rogers first announced plans to launch Ignite Gigabit Internet back in the fall of 2015, to support 4K TV streaming, a move which followed Bell’s launch of gigabit internet in Ontario and Quebec in August of the same year.

Earlier this year, Rogers and Bell raised their internet prices, while Telus also ended a bundle discount for consumers.

Here are the latest Canadian cellphone plan and device deals, plus other promos from wireless carriers such as Rogers, Telus and Bell, from our partner PlanHub. As always, the promos may change at the last minute, but here they are as of Wednesday, November 30, 2022. Check them out below… Bell Noticeable price changes: Get iPhone 14 […]
IIC Deals
59 mins ago

Canada's Commission for Complaints for Telecom-television Services (CCTS) today published its 2021-22 Annual Report. The CCTS is a national and independent organization dedicated to resolving customer complaints about telecommunications and television services, fairly and free of charge. It deals with complaints regarding billing errors, compliance with contract terms and commitments, service delivery, credit management, and...
Nehal Malik
5 hours ago