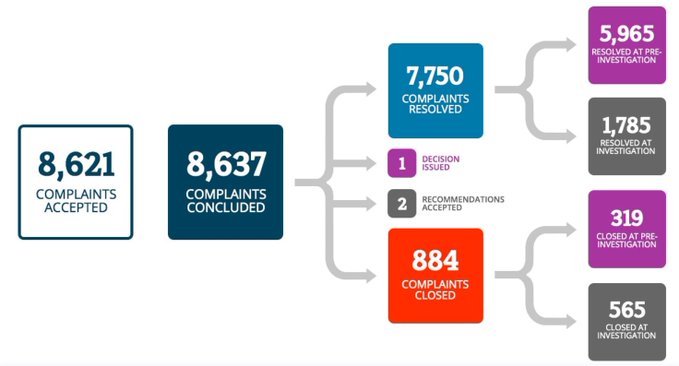 The Commission for Complaints for Telecom-television Services (CCTS) today released its Mid-Year Report for 2020, detailing the complaints received from customers of the telecom and wireless industry.

According to the CCTS, 8,621 complaints were filed by Canadians in the first half of the reporting year, with most about disclosure issues and incorrect charges.

Check out the chart below:

For out-of-mandate issues, 38% was dominated by customer service, related to items such as wait times, rude representatives, etc.

“We’re pleased to see that customers are increasingly able to fix their problems directly with their service providers, and we’re here to help those customers who are not able to do so,” said CCTS Commissioner Howard Maker, in a statement.

Tony Geheran, Executive Vice-President and Chief Customer Officer, Telus, told iPhone in Canada in a statement, “TELUS has led the industry with the fewest complaints amongst national carriers since 2011, and we are proud to maintain that position and see that complaints about our company have decreased since the mid-year report last year. Our longstanding commitment to embrace feedback from our customers and use it to continually improve sets us apart from our peers, and is why we continue to be a leader in customer service.”

“Bell has made it a strategic imperative to champion customer experience and today’s CCTS results indicate our strategy continues to deliver results,” said Mirko Bibic, President and CEO of BCE Inc. and Bell, in a statement. “Bell’s investments in our customer experience teams and in technologies like the innovative MyBell self-serve platform are making it easier than ever before for customers to do business with Bell.”

The CCTS said violations of The Wireless Code also saw a drop of 25%, with the top complaint being providers cutting off service without giving prior notice.

“It’s clear that companies and organizations across the country are dealing with unprecedented challenges at this time and we’re all working hard to meet the demands,” added Maker.

Overall, the CCTS said there was a 12% decrease in complaints compared to the 2018-2019 Mid Year Report.