Burlington, Ontario, resident Jeremy Parsons recently got so frustrated over his internet service from Bell, he decided to take matters into his own hands after reaching a boiling point.

Parsons told Global News he contacted Bell dozens of times over the phone, in regards to what he claims is sub-standard internet service at his home. 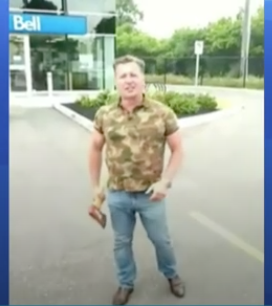 So what does an angry customer do? He drove to a Bell store with his internet modem, took out an axe from his truck, proceeded to smash the modem into bits—all while filming it and sharing it online, of course.

In the video, Parsons says “Bell Canada, for a communications company, you are a failure!”, referring to Bell, adding “you suck!”. He claims in the video “I can’t get you on the phone, you don’t respond on social media,” while holding his axe.

The issue at stake? Parsons says Bell has not delivered on its promises to bring the fastest high-speed internet to his home, while also being unresponsive to his concerns. He says at times his internet would not work altogether.

“I spoke to 14 (Bell) people and lost connections with them three times in three hours,” he explained to Global News. He says Bell supervisors promised to call him back but never did, and on other occasions, the company said they would fix his internet problems.

Bell spokesperson, Nathan Gibson, told Global “Our tech support team has assisted Mr. Parsons on numerous occasions with questions about his internet service and have visited his residence several times to offer assistance. We’ve tested the modem speed at Mr. Parsons’ home, and he is receiving the best service currently available in his area.”

Parsons says after smashing the modem outside the store, every Bell customer came out and shook his hand, with people saying “I wish I could’ve done that.”

According to recent speed tests by PC Mag, Bell was ranked as the fastest ISP in Canada, but it seems for this Burlington man, that wasn’t the case.

The axe smash reminds me of the printer scene from Office Space (NSFW audio):