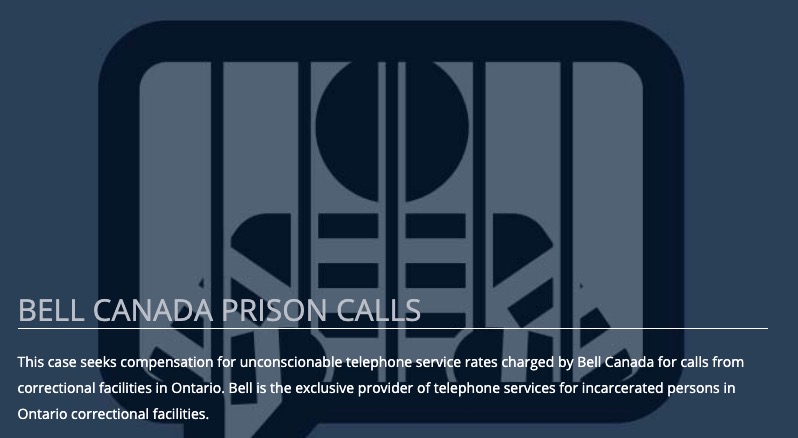 Bell Canada has been accused of charging “exorbitant fees” from inmates within correctional facilities in Ontario, according to a new class action lawsuit.

Sotos Class Actions says the claim against Bell was started by an Ontario resident, “alleges that Bell Canada charged unconscionable telephone service rates and made misrepresentations concerning the cost of telephone calls placed from correctional facilities in Ontario.”

Bell is the exclusive provider of telephone services within Ontario correctional facilities. For incarcerated individuals, they can only make collect calls to landlines via Bell’s telephones, with a 20-minute long distance phone call charged “in excess of $30”.

“Making prisoners’ phone calls to the outside world prohibitively expensive puts a financial and emotional strain on the prisoners and their families. It is grossly unfair because it isolates prisoners, inhibits rehabilitation and contributes to anxiety and depression. Bell Canada’s commitment to promoting awareness of mental health issues rings hollow in light of this practice” said Mohsen Seddigh of Sotos Class Actions, in a statement.

According to Soto Class Actions, they are seeking individuals incarcerated within an Ontario facility since June 1, 2013, or anyone who has accepted a collect call from someone within a correctional facility in the province, since that date as well.

A recent CBC News story which ran on Bell Let’s Talk Day (Jan. 29, 2020), detailed the situation within Ontario provincial correctional facilities and how inmates can only make outgoing collect calls to landlines.

Bell told CBC News at the time its contract was set by the province and rates for inmates are equal to those available for the general public.

An Ontario Court will decide later whether the class action will proceed or not.