Earlier this week, Rogers announced that they are moving forward with their LTE network in 2011 to cover Toronto, Montreal, Vancouver and Ottawa. In 2012, Rogers is planing to add another 25 markets.

The other carriers, such as Telus and Bell, are also testing LTE and are planning to deploy the updated network in early 2012.

However, on the back of the Rogers LTE announcement, Bell has now announced its own upcoming deployment of LTE for 2011. According to a Bell document:

â€œBell has completed 4G LTE trials and we are currently deploying LTE as well. Our competitors will not get in front of Bellâ€™s network leadership. We do not make announcements about our competitive network or product plans that are too far in advance of their actual availability to customers.â€

Seems there’s some heat here. Maybe Bell will be the first to launch LTE! 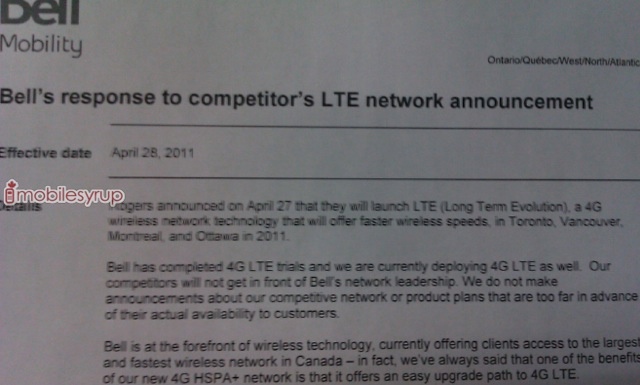