Last month, Bell and a coalition of other media companies, including Rogers, CBC, Quebecor, Corus and more, announced the launch of FairPlay Canada, which is urging the CRTC to create a website blocking service to blacklist piracy websites.

This non-profit organization FairPlay Canada wants to create, would be called the Internet Piracy Review Agency (IPRA), and its mandate would have Internet service providers comply to block nefarious websites which spread piracy, which results in fewer users subscribing to cable TV or paying for content.

Now, according to Ottawa Law Professor and Canada Research Chair in Internet and E-commerce Law, Michael Geist, Bell has started to encourage its own employees to file submissions to the CRTC to help support the website blocking proposal from FairPlay Canada:

A source sends along internal Bell corporate messaging encouraging employees to file submissions with the CRTC on its website blocking proposal. In 2015, Bell paid a $1.25M penalty after some employees were encouraged to post favourable online reviews. https://t.co/Hgkj0GbaNh pic.twitter.com/EyTARTae0t 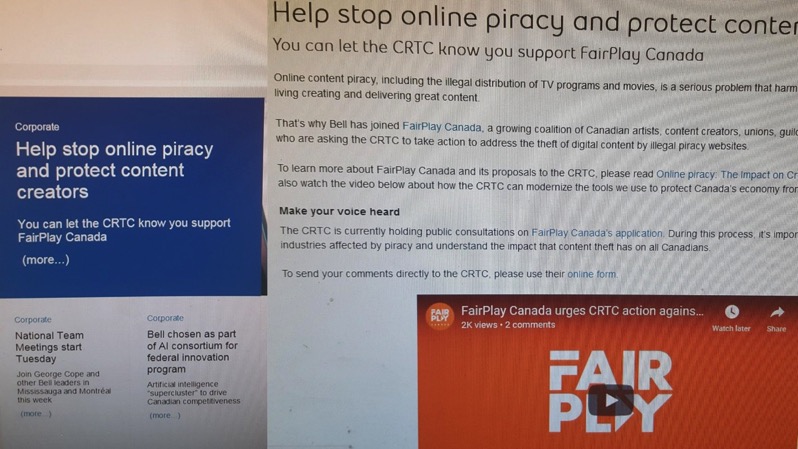 The corporate memo was shared with Geist from one of his sources and reads “help stop online piracy and protect content creators.” Bell informs employees to “make your voice heard” and to send comments to the CRTC online, encouraging support for FairPlay Canada.

Currently, the CRTC is holding public consultations on the matter and to date, thousands of Canadians have submitted comments opposing the website blocking plan, which many argue endangers net neutrality in Canada.

According to FairPlay Canada, “online piracy is theft, plain and simple”, which apparently affects 630,000 Canadian jobs.

Back in 2015, Bell was fined $1.25 million by the Competition Bureau, for having employees post fake glowing reviews of the company’s apps in the App Store. Now, it is encouraging employees to post CRTC submissions supporting FairPlay Canada, which appears disingenuous.

Earlier today, Geist argued on his blog, a website blocking service would most likely erroneously over-block thousands of legitimate websites, as has been the case in other jurisdictions around the world, who have tried similar setups.

Update: Here’s what Geist has to say on this issue, as he has posted about it on his website:

There is nothing on the materials I was provided that indicated Bell also encouraged employees to disclose their affiliation to the company. As of today, there is only one submission of more than 5,200 that lists Bell as the company affiliation (and that intervention is unlikely to be affiliated with Bell). All Canadians can provide their views on the website blocking proposal, but corporate encouragement to employees to participate in regulatory processes on the company’s behalf may raise the kinds of concerns regarding misleading impressions that sparked the Commissioner of Competition to intervene in 2015.