Well, looks like we spoke too soon. There were rumours of November 4th being the launch date of the iPhone 3GS by Bell, and today it has become confirmed. Bell Canada just made it totally official with the following email: 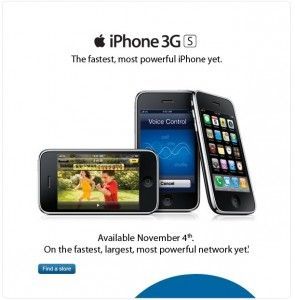 The bottom of the email reads:

You can make the most of the iPhone 3GS on Canadaâ€™s best high speed mobile network. With faster speeds, global coverage and fewer dropped calls, youâ€™ll do more than you ever imagined, in more places than ever before.

If you haven’t read already, we were the first to expose Bell’s iPhone plans early. These plans will be available tomorrow:

With Telus to launch the iPhone 3GS on November 5th, and Bell tomorrow, it’s going to be an exciting day for Canadians that have been waiting for the iPhone to arrive on other networks.