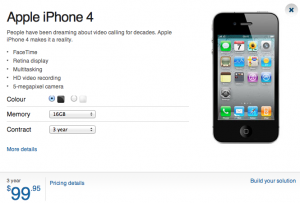 We’ve received news from a tipster regarding the no-contract pricing of the iPhone 4S for Bell customers. Prices are as follows, as our source confidently states:

Bell has not given word on pre-orders, or early upgrade pricing for the iPhone 4S yet. Stay tuned.