Canadian carriers have been waiting patiently for Apple to send more iPhone 6 Plus stock so users that made online reservations can finally get their phones.

Bell has notified customers “Apple has informed us that deliveries to Canadian service providers are currently delayed and are expected to resume shortly. We will get your phone to you as soon as possible.” 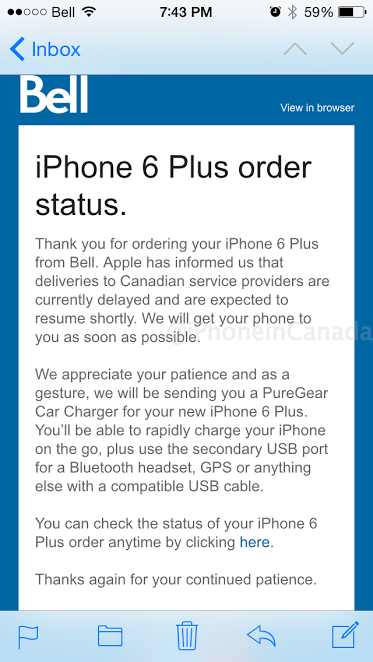 To compensate for the inconvenience, the carrier will be sending customers a free PureGear Car Charger to use with their new iPhone 6 Plus. Nice touch.

During iPhone 6 Plus pre-orders, Bell noted they were experiencing “strong demand” for the device, and like other Canadian carriers there has been a shortage of the larger iPhone.

Still waiting for your ‘Big 3’ iPhone 6 Plus reservation? If you have an Apple Store in your city, my advice is to follow this live reservations tracker and see if you can reserve a carrier device here simultaneously.