August is probably the worst time to buy a new iPhone, since new models (iPhone 8 where you at!) are just around the corner, which will most likely see existing iPhone 7 and iPhone 7 Plus prices drop on contract.

But if you’re adamant on signing up on a two-year contract with Bell, there’s a free Apple TV 4 promo right now, only for Bell Fibe TV and Unlimited Internet customers.

Those who activate an iPhone 7 or iPhone 7 Plus on a two-year Premium or Premium Plus plan with data, will get a free fourth generation Apple TV (valued at $199 CAD for the 32GB model), while supplies last. 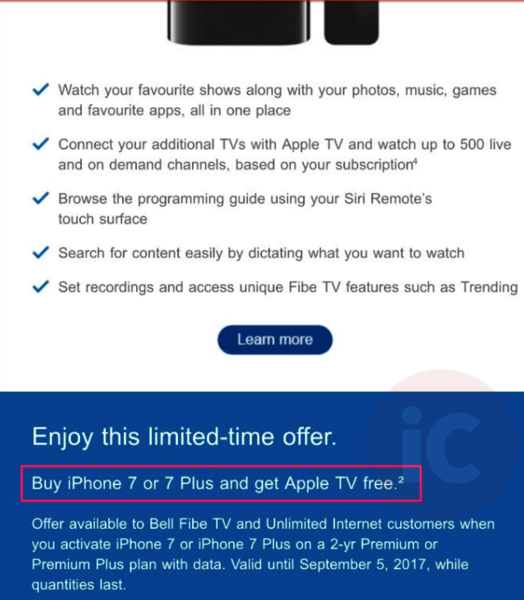 Bell Fibe TV has a companion Apple TV app, which is another way for customers to access the service on a second TV in the home.

Again, if you know someone about to sign a contract and they meet these requirements, let them know about this free Apple TV 4 offer.

If you’re looking for the best AirPods 2 deal for Black Friday, it’s available from Bell Canada (of all places). Yes, that’s right, Bell is selling Apple AirPods 2 for $99.98 on its website, which is far below the $129 Black Friday deal pricing we’re seeing on Amazon.ca and Walmart. As of writing, Bell is […]
IIC Deals
17 hours ago