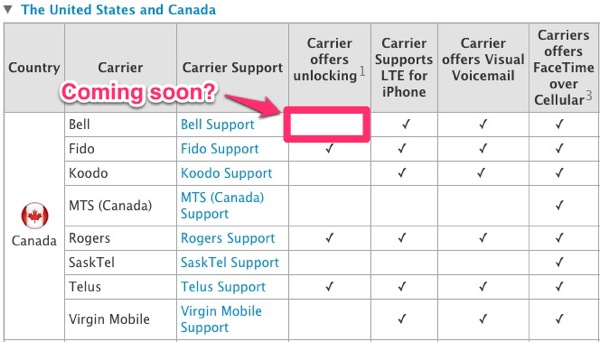 Now, it looks like Bell is finally unlocking iPhones as their policy was recently updated. iPhone in Canada reader ishwari notes Bell offered to unlock his iPhone for $70. The process involved providing his IMEI number and then restoring his iPhone in iTunes, similar to other unlocks (we’re going to verify soon it worked for him).

To clarify the situation ourselves, we called Bell support (a few times) and were told by one rep it would cost $70 for the unlock, which is ‘not operational yet’ but would be ‘coming in the next couple of weeks’. Anything can change, but it was pretty convincing from our conversation with them.

From the sounds of it, after speaking to Bell, iPhone unlocking will be coming soon. I know many of you have been patiently waiting. Stay tuned.

Update: A reliable source familiar to the matter speaking on the condition of anonymity tells us this is “coming soon, very soon”. No other timetable was provided but all we can do now is wait for the announcement.

Update 2: Reader ishwari tells us a Bell rep called him and said the iPhone unlocking policy will start on Monday. We’ll find out soon enough.

Bell Canada today announced its unaudited financial results for the fourth quarter and full year ended December 31, 2022. For its wireless business, Bell reported $2.666 billion in operating revenue for Q4, an increase of 7.7% year-over-year. The company also beat its Q3 2022 wireless revenue of $2.466 billion. For 2022 as a whole, Bell...
Nehal Malik
17 hours ago