Yesterday was the annual Bell Let’s Talk Day fundraiser, which saw the company donate money towards mental health initiatives, at the rate of 5 cents for every phone call, text, long distance call or social interaction. 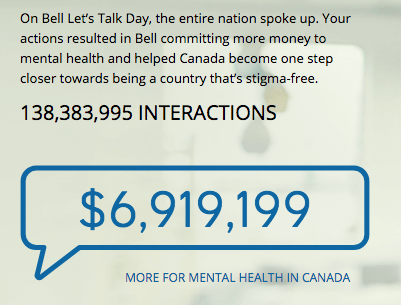 “On behalf of everyone on the Bell Let’s Talk team, thank you Canada for showing the way in taking mental health forward – like never before! The growing engagement by Canadians in Bell Let’s Talk Day shows that together we’re changing attitudes and truly reducing the stigma around mental illness. It’s the key to making progress in a critical national health concern,” said Mary Deacon, Chair of Bell Let’s Talk, in a press release.