Nunavut now has the start of a high-speed broadband satellite network, as Bell subsidiary, Northwestel, has launched a high-speed network first in Iqualuit, the capital of the Northern territory, with all 25 Nunavut communities gaining access to the network “in the coming months.”

The Tamarmik Nunaliit project is a partnership between Northwestel, the Nunavut Government, the Government of Canada and Bell, while Industry Science and Economic Development Canada (ISED) contributed $49.9 million, into the Connect to Innovate program.

Starting in October 1, new 15 Mbps residential internet plans will be available from Northwestel for $129 per month in Iqaluit first, which includes 100GB of usage. A new 5 Mbps internet plan will cost $80 per month, which Northwestel says offers $100 per month savings over existing rates. For residents interested in pre-ordering the new internet packages, they can do so online starting September 19 or at the Nunavut Trade Show.

Northwestel says the new 15 Mbps service will reach communities in Cambridge Bay, Arviat and Rankin Inlet by the end of the year, while all other Nunavut communities in 2019.

“As a Northern company, Northwestel is proud to deliver the next generation of satellite Internet to Nunavut in partnership the Government of Canada and the Government of Nunavut. This Tamarmik Nunaliit network will significantly improve broadband Internet services for schools and health centres across Nunavut while enhancing access and innovation opportunities for residents and businesses in every community,” said Curtis Shaw, Northwestel President, in an issued statement to iPhone in Canada.

According to Bell, the image below indicates locations of new wireless sites, plus the route container ships will embark on to deliver the new equipment. 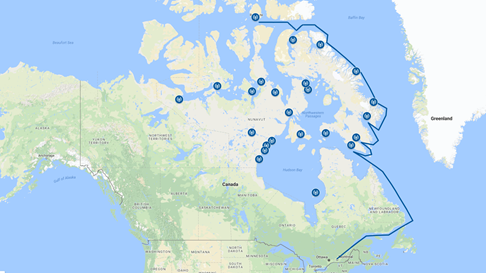 “We are proud to be part of this celebration with Northwestel, Telesat and the Governments of Canada and Nunavut as we work to ensure people in all regions of Canada can access the economic and social benefits enabled by advanced broadband networks,” Said Stephen Howe, Chief Technology Officer, Bell Canada, in a statement.