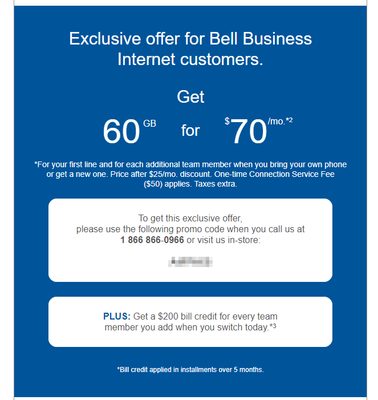 Bell looks to be offering a Black Friday plan for some of its Business Internet customers, as a $70/60GB plan is being offered via email, according to RFD.

According to the exclusive offer, that requires the one-time promo code to be used, it applies for first lines and also each additional line for team members for bring your own device (BYOD).

Bell says the $50 Connection Service Fee still applies, while a $200 bill credit will be added for each team member added if they switch over to Bell Mobility (applied over the period of 5 months).

The fine print says the offer is “available to current Bell Small Business Internet customers with a new activation on eligible 2-year plans with Bell SmartPay or when you bring your own device (excluding Personal, Tablet and Mobile Internet plans). Activation must be in the same name as the primary account holder. Reduced data speeds beyond 60 GB will be provided up to 512 kilobits per second. You can continue to use data at these reduced speeds until your next monthly bill period. Not compatible with Roam Better.”