The device, which weighs about 3 ounces, is compatible with Windows & Mac OS. The modem can operate for up to four hours on a single charge. MiFi will allow for 7.2Mbps transfer speeds, which should be more than enough for streaming video and some online gaming. The MiFi also has a microSDHC memory card slot, letting it double as a thumb drive. The range for devices is about thirty feet.

This announcement makes Bell the first to carry the MiFi 2372 in Canada. Much like Roger’s 3G Stick, this one could come in much more handy with it’s ability to let up to five devices be connected over it’s WiFi. This would be great for a road trip 🙂

There is also suppose to be another Bell Hotspot product coming down the shoot called the HPSA+ Turbo Stick. The HSPA+ Turbo Stick will be exclusive to Bell and plugs into a USB port of notebook or netbook PCs, with a microSDHC card slot for as much as 32GB of storage. 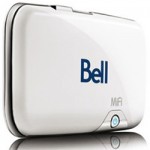