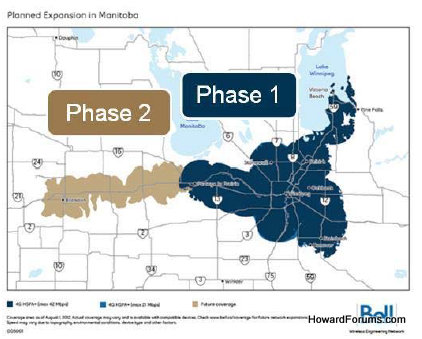 Bell customers, it’s now official! Bell will be launching their potent HSPA network in Manitoba beginning on August 1st. There will be two phases during the launch. Phase one is said to cover “69% of the Manitoba market,” comprising of Oakbank, Selkrik, Steinbach, Stonewall, and Winnipeg. Phase two will cover an additional 5 percent of the market, including Brandon and Portage la Prairie.

And for those wondering, Bell will be using Telus phone towers.

Compatible devices include Bell, Virgin Mobile, and PC Mobile phones. To activate your device, just visit a retailer such as Bell, Wal-Mart, Wireless Wave, or another carrier involved store.

There are restrictions, as usual, according to MobileSyrup:

“While a Bell client will enjoy access to a powerful network offering 4G speeds while in the Bell network coverage, service outside of the network will cease until the client returns to the Bell network. As a result calls will not be connected; Data & SMS will not be available. 911 will continue to be available as long as the client is in coverage of other wireless providers…. At present, roaming outside of the Bell HSPA network in Manitoba is not available to Bell clients. This means that wireless service is limited to the network coverage area.”

Also, do not get HSPA confused with actual 4G LTE speeds. An HSPA network is faster than traditional 3G speeds, however it’s still a long margin slower than the HSPA+ network.