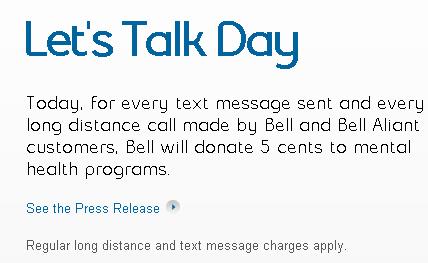 Today is Bell’s Let’s Talk Day, an initiative to raise awareness and discussion about the lingering stigma that surrounds mental health and illness. Olympian Clara Hughes is the spokesperson for the campaign:

“Fighting stigma is critical to advancing Canadian mental health, and it’s the first pillar in the Bell Let’s Talk mental health initiative,” said Clara Hughes, Canada’s six-time Olympic medalist and the smile at the forefront of the Bell Let’s Talk campaign. “By telling my own story, I’m proud to be a part of the conversation that is having such a positive impact on the lives of every Canadian affected by mental illness. We’re really looking forward to topping the more than 66 million texts and calls made on Bell Let’s Talk Day last year – and based on the incredibly positive reaction to Bell Let’s Talk I get from people everywhere in this great country, I know we can do it!”

You can get involved today to help raise awareness too by…

According to Bell, last year’s Bell Let’s Talk Day campaign resulted in total of 66,079,236 text messages and long-distance calls by customers and resulted in the company donating $3,303,961.80 to Canadian mental health programs. Let’s get calling, texting, and retweeting folks!

If you’re looking for the best AirPods 2 deal for Black Friday, it’s available from Bell Canada (of all places). Yes, that’s right, Bell is selling Apple AirPods 2 for $99.98 on its website, which is far below the $129 Black Friday deal pricing we’re seeing on Amazon.ca and Walmart. As of writing, Bell is […]
IIC Deals
22 hours ago