Cope said high-speed mobile data use is up 37 per cent year-over-year, while Internet data streaming has more than quadrupled in five years, in his first appearance in Manitoba since the MTS takeover. 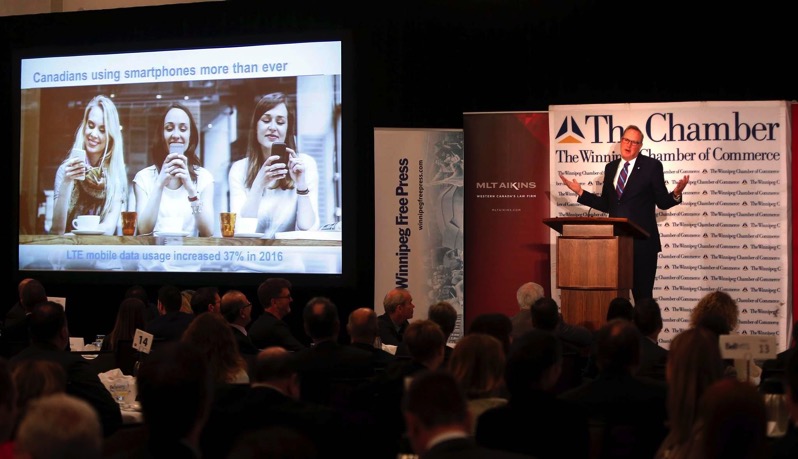 “The incredible growth we’re seeing in wireless, we think it’s going to continue. Video on wireless is clearly just an explosion,” Cope said.

He added, “We have to stay ahead of the capacity requirements to make sure the country’s economy itself is running on the back of all these networks. But, also, we have to increase the speeds of these services because of … the amount of usage that we’re seeing.”

Bell is on pace to invest $20 billion into its networks by 2020, while competitors similarly do the same to meet demand from consumers.

Commenting on Bell’s recent $3.9 billion takeover of MTS, and the sell-off of 100,000 customers to Telus, Cope said “Once customers have moved to where they’re going to be, then it’s an open market and it’ll be a competitive market.”

Bell MTS plans to spend $1 billion over five years to improve wireless networks in Manitoba, adding faster LTE-A networks, with 90 per cent of the latter to be completed by this year end. While some applaud the expansion, critics have said the change will see price increases compared to MTS rates prior to the takeover.

Yesterday, the home of the Winnipeg Jets, the MTS Centre, was renamed to Bell MTS Place, with signage set to be ready for the 2017-18 NHL and AHL season.