The City of Hamilton is fighting Bell Canada over what it says is shoddy work done on its roadways and sidewalks by the corporation.

According to CBC News, the city first filed a motion with the CRTC back in January to acquire a new memorandum of access agreement (MAA) with Bell, with hopes it would allow for better quality control of work done by outside contractors to ensure city standards are met.

Bell only answered the January application, despite Hamilton resubmitting again in April. The last MAA expired in 2012. The city has spoken with the CRTC numerous times in camera but was only able to get an open discussion this Wednesday.

City solicitor Janice Atwood-Petkovski says Bell contractors are currently doing work on municipal roadsides, but in most cases the work is subpar with the city unable to hold the company accountable.

Brian Duxbury, an external lawyer hired by Hamilton, explained the issues to the general issues committee on Wednesday and detailed the poor work done by Bell contractors, which included the use of duct tape to affix wires on sidewalks, seen below: 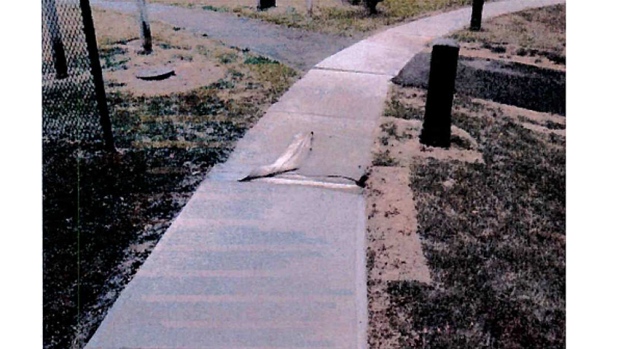 According to the filing, Bell contractors used duct tape without the city’s knowledge on the sidewalk at Bing Crescent. When the city complained to the CRTC, Bell denied it had done work in the area. However, a further investigation revealed “Bell did in fact conduct works, including works related to the utility box at the right hand side of the photo.”

Counsellor Matthew Green calling it “embarrassing,” and also saying “Is Bell hiring or subcontracting other companies?” He followed up to say “It looks like this one was done by Red Green.”

Another example the city noted in its filing were Bell cabinets installed in a non-approved location on Amberwood Drive, in front of St. Pauls Elementary school. The first cabinet installed was in a sight-triangle, making it a safety hazard for drivers and pedestrians.

Hamilton asked Bell to first install the cabinet in a different location in 2011. Bell did not respond to requests to have it removed, but “compounded its error by installing a second cabinet at the same location.” Four years later, Bell has not acted to the city’s original request.

Bell Canada spokesperson Jacqueline Michelis responded by saying it wants to resolve the issues and noted the city is an important part of their $20 billion plan to deploy advanced fibre and mobile networks by 2020.

“We look forward to resolving any remaining concerns the city may have and to moving forward with our plans to bring the world’s best communications technology to Hamilton and other locations across Canada,”

What do you think about the City of Hamilton’s complaints against Bell?