St. John’s, Newfoundland, is set to be the first city in Canada to launch Bell’s smart kiosks, as part of the city’s three year Smart City pilot project with the latter.

Metrobus will deploy these interactive smart kiosks, which will offer Wi-Fi, charge your phone, the ability to contact 911 and view Metrobus schedules, for those out and about or for those waiting for the bus. 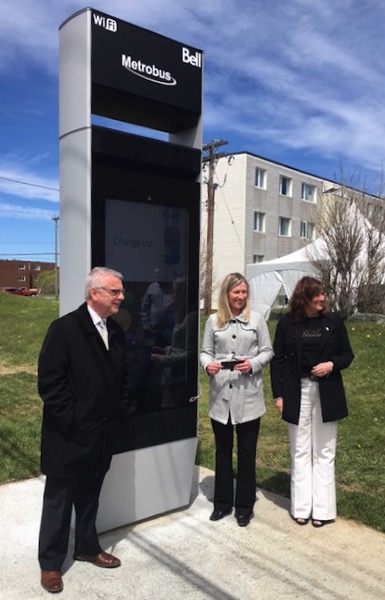 “This technology will improve and enhance service by providing information to our customers where and when they are looking for it,” said Metrobus General Manager, Judy Powell, in an issued statement to iPhone in Canada. ‘Our partnership with Bell will also begin to establish free Wi-Fi access throughout our kiosk service area.”

These smart kiosks feature two 55-inch (140cm) LED touchscreens, housed in a weatherproof aluminium structure. Kiosks are accessible with buttons and braille, while they don’t block sidewalks. Wi-Fi will be available to those within 70 metres of each smart kiosk.

“Bell is proud to partner with Metrobus to introduce both residents and visitors to the many benefits that smart kiosks will bring to St. John’s,” said Bell Senior Vice President Gary Semplonius, in a statement. “We look forward to our continuing partnership in the months ahead to ensure St. John’s remains at the forefront of deploying Smart City technology.”

The first kiosk has been installed and is currently operational, located at the bus shelter on Torbay Road beside the Homeport Hotel, while a second kiosk is set to be installed across the street. This summer, the remaining three kiosks will be installed throughout downtown and Kelsey Drive.

The smart kiosks, according to Metrobus, are self-sustaining as they also provide transit with an additional revenue tool, while staff will monitor the new program throughout the three-year pilot period.