With the launch of Apple Watch Series 3, cellular connectivity arrives for the first time. In Canada, Bell is Apple’s first launch partner (Telus will come later this year), charging customers $5 per month to use their smart watch on a data plan (most plans in the USA are $10/month).

Fellow Canadian Jesse Hollington over at iLounge has a great walkthrough of setting up Apple Watch Series 3 LTE models with Bell.

Apple Watch Series 3 uses an integrated eSIM, which will share the same number as your iPhone. Bell calls this feature NumberShare. Here’s Jesse’s take on the entire setup process, which starts within the Apple Watch iOS app—there’s no need to speak with a human to set this up:

In our case, activating on Bell Mobility in Canada, we were presented with a series of four screens, first showing us the “Smartwatch” plan fees involved, then prompting us to sign in with our “MyBell” account credentials, asking us to confirm our emergency address, and then showing a final confirmation screen before returning us to a final confirmation in the Watch app. The entire process took under a minute. 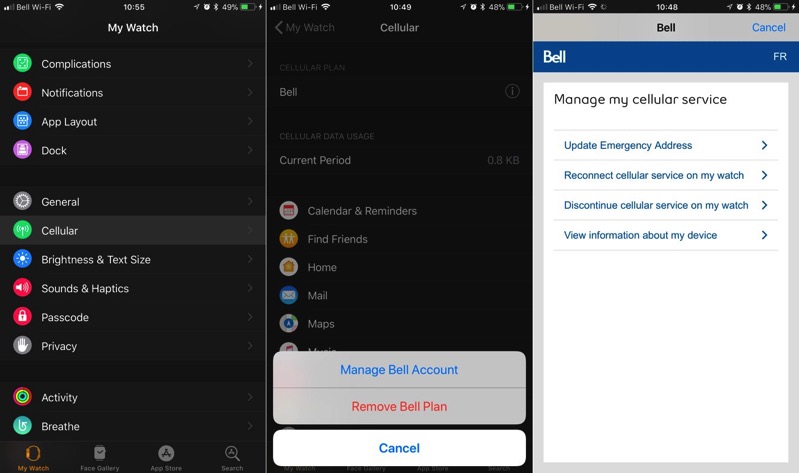 Once complete, Bell also sends customers a confirmation text message to say “Activation complete. You now have access to wireless service on your watch.”

Bell will also assign a “device identification number”, which is another phone number on your bill, to differentiate from your iPhone number for billing purposes. This is not a real number but only to identify your Apple Watch cellular data plan, but it may confuse some customers that it could be their watch phone number, reports Jesse.

How to check cellular data usage? The Apple Watch iOS app gets a new section called Cellular Data Usage, under My Watch > Cellular > Cellular Data Usage. It will also show your cellular plan and carrier number in this section. To remove your Bell plan, just tap the “i” icon next to the carrier’s name, while this option also allows users to mange their cellular service as well, such as updating an emergency address.

How did your Apple Watch Series 3 setup go with Bell?

If you’re looking for the best AirPods 2 deal for Black Friday, it’s available from Bell Canada (of all places). Yes, that’s right, Bell is selling Apple AirPods 2 for $99.98 on its website, which is far below the $129 Black Friday deal pricing we’re seeing on Amazon.ca and Walmart. As of writing, Bell is […]
IIC Deals
1 day ago