The Catalyst Capital Group Inc., the private equity firm based in Toronto and the largest debt holder of struggling wireless entrant Mobilicity, has dropped out of Ottawa’s 700MHz wireless spectrum auction, as noted by a change on Industry Canada’s website, notes the Globe and Mail. 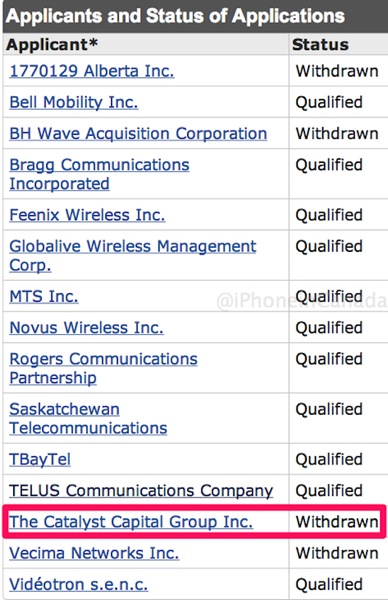 This now leaves the following 11 companies set to bid on the 700MHz spectrum, seen as ‘beach front property’ since these airwaves are able to easily penetrate building and have signals go further. With one less bidder, this means incumbent carriers now have one less competitor to deal with.

Ottawa revealed the final list of bidders last month. The auction is set to take place on January 14, 2014.

TekSavvy announced on Monday it has launched a new referral program in time for the holiday season, offering both parties $120 in bill credits each. The new “Give $120 and Get $120” program is “about pivoting from spending on unnecessary items to sharing savings between customers and their friends or family,” said a spokesperson in […]
Gary Ng
1 day ago