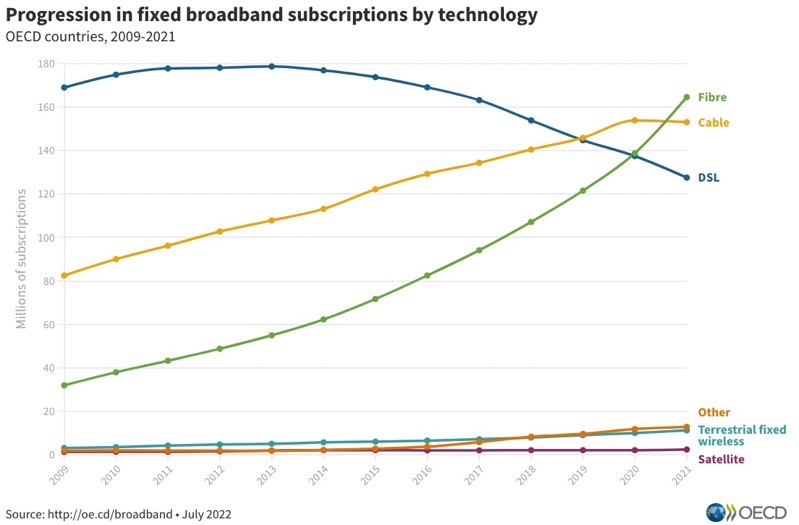 According to the Organisation for Economic Co-operation and Development (OECD), which Canada is a member of, the group says fibre has surpassed cable when it comes to fixed broadband internet for the first time.

An OECD spokesperson told iPhone in Canada across its 38 member countries, 34.9% of fixed broadband subscriptions are now based on fibre connections, according to its latest data.

Canada was ranked 11th with 15.9 million fixed broadband subscriptions as of December 2021.

Fibre internet subscriptions increased 18.6% year-over-year in December 2021, to surpass cable for the first time, taking 32.4% of fixed broadband subscriptions. DSL subscriptions were at 27% and continue to decline.

The largest growth in fibre connections was in Costa Rica, Israel, Greece and Belgium all seeing increases beyond 80% in 2021. Total fibre broadband is now at 50% or above in 13 OECD countries including Chile, Finland, Luxembourg, New Zealand, Norway, and Portugal. Members with over 70% fibre connections include Iceland, Japan, Korea, Latvia, Lithuania, Spain and Sweden.

Fixed broadband internet continues to increase in member nations, seeing a 3.9% increase in 2021, growing from 454 million to 472 million. Switzerland has the highest concentration of fixed broadband subscriptions at 48.4 per 100 people, followed by France (46%), Norway (45%), and Denmark (45%).

Canada is not even in the picture, despite the rosy picture painted by the federal government and its plans to bring high speed internet to all Canadians by 2030.

Canada’s Mobile Data Usage is Far Below the OECD Average

Data consumed averages 8.4GB per OECD subscription per month, but differs by country. Finland leads with nearly 37 GB per month per subscription, followed by Latvia (29.7 GB) and Austria (26.4 GB). Mexico and the Slovak Republic came in near the bottom at just below 4 GB.

As for Canada? OECD data said Canada saw 4.82 GB of mobile data usage per month, far below the OECD average of 8.37 GB. Canada ranks near the bottom, just ahead of the Netherlands, Czech Republic, Colombia, New Zealand, Belgium, Mexico and Slovak Republic. 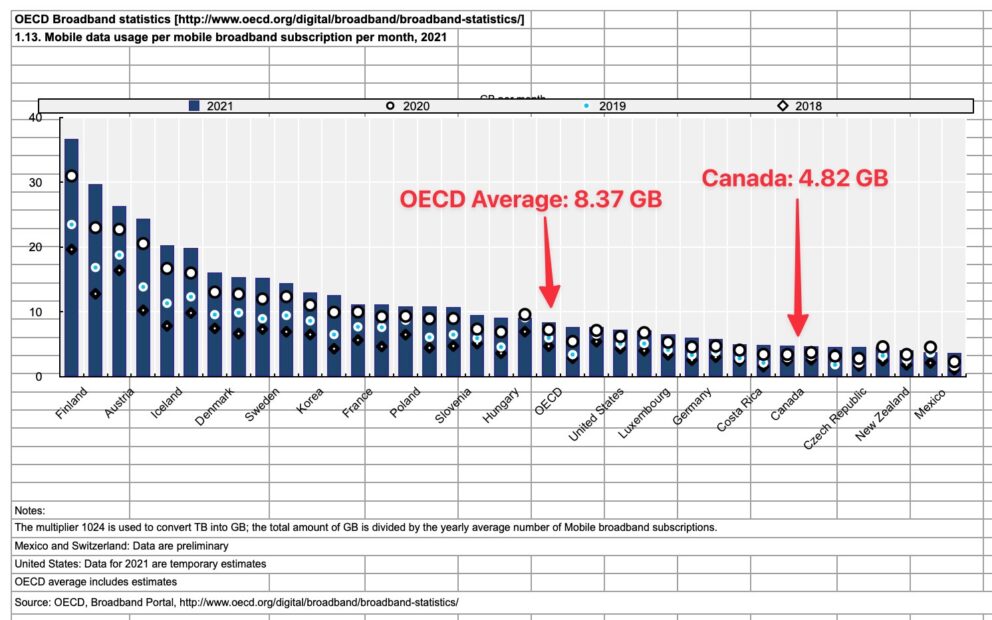 A recent report by consulting firm Wall Communications, commissioned by the federal government, concluded internet prices in Canada have increased consistently since 2019, after the CRTC’s wholesale rates decision.