Canadian Telcos Contributed up to $70.7 Billion to GDP in 2020, Says Industry Group Report

The Canadian Wireless Telecommunications Association (CWTA), the industry group that represents telcos in Canada, has released the results of a commissioned report on how important telcos are for the country.

As expected, the conclusions were quite positive across the board.

The report from Accenture, titled “Connecting Canadians during COVID-19: The impact of the wireless and wireline industry in 2020 and beyond,” estimates the telco industry in Canada “contributed up to $70.7 billion to GDP while supporting almost 600,000 jobs” in 2020, despite the Canadian economy seeing a contraction of 5.4%. 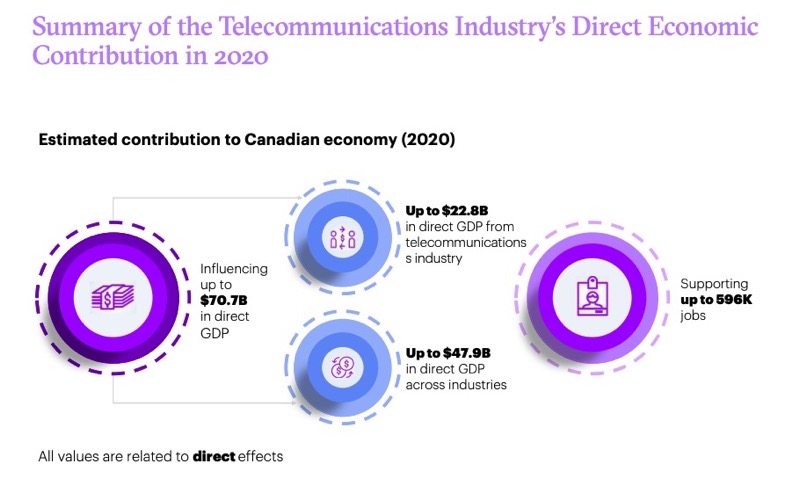 “The telecommunications industry has played a key role in keeping Canadians connected since the outbreak of COVID-19 and it is clear that Canada’s high quality digital infrastructure has been crucial in sustaining economic and social activity across the country,” said Robert Ghiz, president and CEO of the Canadian Wireless Telecommunications Association, in a statement.

“Despite the economic headwinds of 2020, Canada’s telecom operators continued to invest billions of dollars to expand and upgrade Canada’s telecommunications infrastructure, and provided additional support to Canadians dealing with the hardships of COVID-19,” added Ghiz.

The report also details the investment from telcos last year, in the form of over $11 billion invested in wireless and wireline connections. Canadian telco service providers also “supported Canada through an estimated $6.8 billion in taxes, which help fund government services such as social assistance, healthcare, infrastructure and public safety.”