Journalist Peter Nowak shares a simple chart he received from Geoff White, counsel for the Public Interest Advocacy Centre (PIAC), on the state of Canadian wireless pricing and the changes that have happened in about two years. The following details the changes of a basic smartphone plan from one of the ‘Big 3’, from August 2012 to March 2014—check it out below: 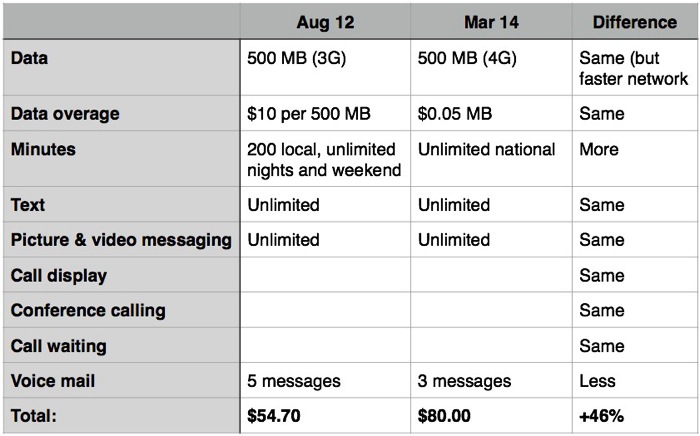 As you can see in the ‘Difference’ column, nothing has really changed aside from more minutes (at a time when voice usage is decreasing), a smaller voicemail inbox and the significant jump in pricing, up 46%.

The PIAC explains to Nowak:

“In just two years the basic entry point into smartphone ownership (and with a bare minimum of data) has increased 46 per cent. This and similar price increases cannot be seen as positive for anyone except the service providers themselves.”

Nowak also breaks down J.D. Power’s claim of “on average, monthly bills for wireless service have dropped by $7 for customers in Canada, helping to improve overall satisfaction,” as stated in their recent report on wireless satisfaction. The bottom line: wireless pricing isn’t going down, it’s increasing.