The CCTS (Commission for Complaints for Telecom-Television Services) has released its annual report, highlighting the services Canadians had the most complaints about. The CCTS reports on all telecom services from the internet, wireless, television, and home phone. 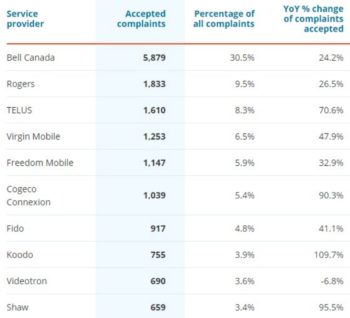 Of the major Canadian providers, Bell Canada saw 5,879 complaints filed towards their services. Rogers followed with 1,833. Telus was not far behind with 1,610. Freedom only received 1,147.  While the margin between Rogers and TELUS was small, Telus saw the largest year over year growth in the number of complaints, reaching 70.6% in the latest report.

iPhone in Canada received a statement from Tony Geheran, Executive Vice-President and Chief Customer Officer at TELUS. Geheran notes: “We have been on a journey to put our customers first for over a decade, and we know there is still work to be done. Our customers have my commitment that we will always listen, and will continue to improve based upon their feedback.”

“We’re on a multi-year journey to improve our customer experience and customer feedback is so important to us. While one complaint is one too many, we have started to see progress on our plan — we have the fewest complaints per subscriber of any national carrier and we are the only with a drop in complaints over the last seven years.” said Eric Agius, Senior Vice President, Customer Care, in a statement to iPhone in Canada.

Of the 19,287 complaints, a staggering 41% was targeted towards wireless services. The second-highest service met with complaints was the internet with 25.5%. Television and home phone were met with only 16.3% and 14.6% respectfully. Finally, long-distance services capped off the report with 2.5%. CCTS states that: “TV complaint issues were over three times higher than in 2017-18”. This was in part by 2018-2019’s report being the first full year to acknowledge television complaints.

CCTS also broke down the metrics by outlining the aspects Canadians took umbrage with. 43% of the complaints filed were targeted towards billing. 32% was focused on contract disputes and service disruptions had a sizeable total of 21.8%. Credit management rounded the report off with 3.1%.

It’s worth noting that the CCTS forwards the reported complaints to the 300+ participating service providers to resolve customer complaints. CCTS states that of the 14,272 complaints filed last year, 92% were resolved. This year, a total of 17,627 complaints were resolved.

Rogers today announced its unaudited financial and operating results for the fourth quarter and full year ended December 31, 2022. Overall, Rogers reported a total of $4.16 billion in revenue for Q4 2022, up 6% year-over-year from Q4 2021. Quarterly service revenue was also up 6%, to $3.43 billion. For the entirety of 2022, Rogers posted...
Nehal Malik
13 hours ago