Recently TELUS, Rogers and Bell increased wireless prices across Canada by $5 per month and even more for bring your own device (BYOD) customers, blamed on the falling Canadian dollar.

Keeping track of cellphone prices in Canada can be very complex, especially when they keep changing all the time. To make things easier, our friends at Sphere have created an infographic showing how much it costs to own a cellphone. Scenarios include various amounts of data along with subsidized and BYOD (but excludes MB, SK, QC).

Rogers CEO Guy Laurence recently told analysts the cost of running a wireless network is much more than a cup of java, saying “If you think about how much work it takes to build, run and upgrade a national mobile network, trust me, it’s a lot more work than making a cup of coffee.”

Peter Nowak from Alphabeatic took those words and put them into a graphic of just how many Starbucks lattes (at $3.45 CAD each) Canadians sacrifice each month to pay their wireless bill, compared to other countries around the world. Check it out below: 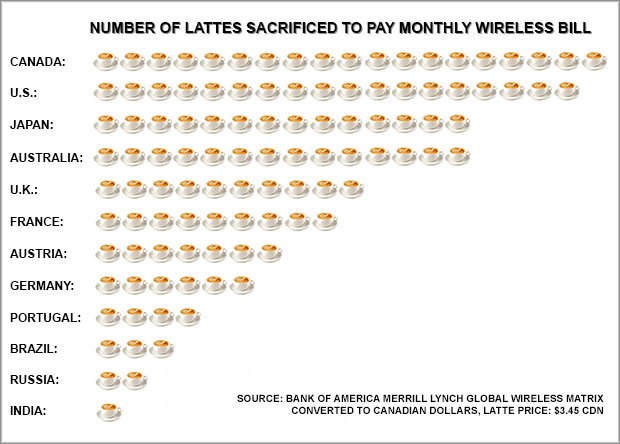 Owning a smartphone with a data plan in Canada isn’t getting any cheaper. Maybe it’s time to move to Saskatchewan, Manitoba or Quebec, right? They seem to be immune from our falling Canadian dollar and price hikes (well, except for Bell customers in Quebec now).