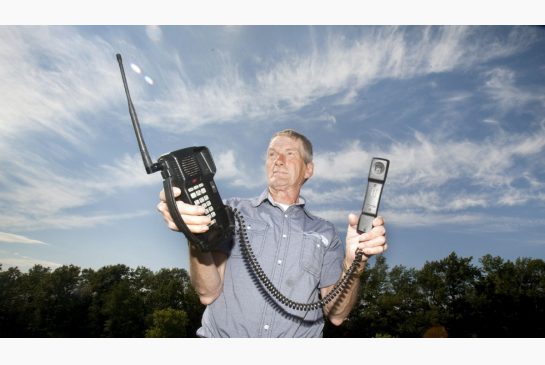 Exactly 30 years ago on July 1, 1985, a call was made between Art Eggleton and Jean Drapeau, the mayors of Toronto and Montreal at that time, which marked the debut of cellphones in Canada (via The Star).

Canada’s first cellphone customer Victor Surerus recalls that he paid $2,700 for his first cellphone 30 years ago to help run his business as a travelling funeral director, and it was “worth every penny”. He says his contract with Bell amounted to roughly $10,000 per year.

The phone attached to an aerial in his car and came with its own carrying bag.

“This way you had the freedom of doing things and you weren’t tied down,” he says now from his home in Roseneath, Ont. “The price was high to pay for it, but it was worth it.”

Francis Fox, the federal minister of communication at that time, says the phone companies would defend their turf by saying their industry was heavily regulated and the CRTC was there to protect the consumer. “Their great line was always, ‘If it ain’t broke, don’t fix it,’“ he says. Fox says the recent quarrels between the federal government and Rogers, Telus, and Bell over competition are echoes of the arguments he heard 30 years ago involving the landline monopolies. “What goes around comes around,” he said.

Rogers Wireless executive vice-president Raj Doshi joined the company in 1989, when it was still Cantel AT&T and mobile telephones were still a luxury item. Doshi has the original Cantel ad from January 1985 announcing “the end of the line for the telephone” framed in his office as a reminder that back then, competition was less important than explaining why people needed to spend thousands of dollars on a cellphone.

However, the exceptionally high prices of cellphones eventually fell as technology advanced, networks matured, and new competitors entered the market.

Here are the latest Canadian cellphone plan and device deals, plus other promos from wireless carriers such as Rogers, Telus and Bell, from our partner PlanHub. As always, the promos may change at the last minute, but here they are as of Wednesday, November 30, 2022. Check them out below… Bell Noticeable price changes: Get iPhone 14 […]
IIC Deals
13 hours ago

Canada's Commission for Complaints for Telecom-television Services (CCTS) today published its 2021-22 Annual Report. The CCTS is a national and independent organization dedicated to resolving customer complaints about telecommunications and television services, fairly and free of charge. It deals with complaints regarding billing errors, compliance with contract terms and commitments, service delivery, credit management, and...
Nehal Malik
17 hours ago