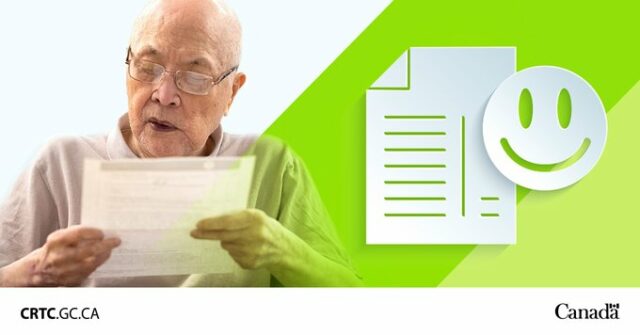 The Canadian Radio-television and Telecommunications Commission (CRTC) has announced it has taken “another step to strengthen consumer protection,” as it has mandated telcos to offer free paper billing for certain segments of Canadian consumers.

The following Canadians can now get paper billing at no extra cost, starting immediately, says the CRTC:

“There are still many Canadians who have legitimate needs to receive their bills in paper format. This decision strikes a good balance between allowing providers to encourage their customers to switch to digital billing and ensuring Canadians are treated in an inclusive and accommodating manner. We expect all providers subject to these new rules to swiftly make the necessary changes,” said Ian Scott, Chairperson and CEO, CRTC, in a statement.

The CRTC says service providers will need to update their websites with this information, plus also train employees and systems to accommodate for the new measure.

Wireless carriers in the past few years have turned to paperless billing only, which affected those without access to the internet to obtain their bills.

SaskTel has today announced the expansion of its 5G wireless network to a number of communities in rural Saskatchewan, including the Town of Davidson and the Nekaneet First Nation. SaskTel 5G is now available in the following rural communities of Saskatchewan: Baildon Craik Davidson Ituna Turtleford Nekaneet First Nation “Our government recognizes how important wireless connectivity has...
Usman Qureshi
1 hour ago

Shaw Communications on Tuesday announced consolidated financial and operating results for its fiscal quarter and year ended August 31, 2022. The company reported consolidated revenue of $1.36 billion for the quarter, down 1.5% year-over-year. This includes $325 million in earnings from the Wireless segment as a whole, up 1.2%. Adjusted EBITDA for the period dropped...
Nehal Malik
4 hours ago