The CRTC announced upcoming changes to rules that aim to regulate the Canadian broadcasting system. There is “only” one tiny problem: loopholes in the announced rules allow Rogers and Bell to tweak the rules in their favour. As Peter Nowak puts it, it gives them whatever they want.

You may recall that the PIAC and CAC (Public Interest Advocacy Centre and the Consumers Association of Canada) asked the CRTC to require Rogers and Bell to make CraveTV and shomi available to all Canadians.

The regulator answered with a rule that apparently favours the consumer advocates’ demand. There is a caveat, though: under the three options available, Rogers and Bell can choose a “video-on-demand service” category that favours them. 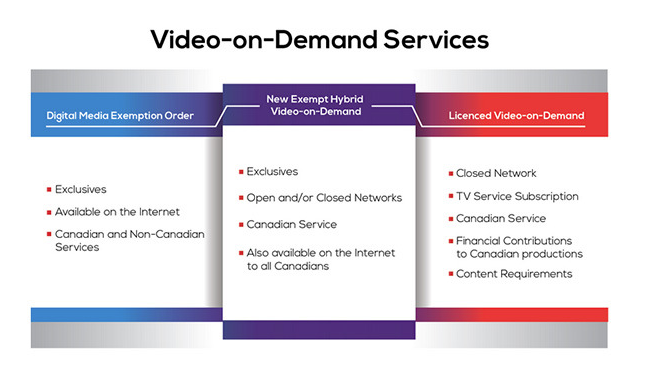 Until last Thursday, there were two options: licensed video-on-demand and digital media exemption order. Both of them are expensive for broadcasters. The third option — in the middle of the above image — however, gives the best of both aforementioned options: “the ability to have exclusive content and remain exempt from CanCon requirements,” writes Nowak, pointing to facts highlighted by Paul Andersen, president of independent ISP egate Networks. “The downside is that shomi and CraveTV would have to be made available to everyone over the Internet without any other tied services.”

In other words, the companies could happily classify their services as “hybrid” to be exempted from CanCon requirements and to get the green light for exclusive content. They would have to offer Shomi and Crave TV to everyone in exchange, but they could then charge whatever they want for the standalone services.

Yes, these services will be available to all Canadians with an Internet connection, but the question is this: at what price? Rogers and Bell can choose to price CraveTV and shomi at any amount they want. So, once again, you are going to have access to these services, but are you willing to pay the price they want?