The Canadian Wireless Telecommunications Association (CWTA), a lobby group for Canada’s wireless carriers, has taken out a full page ad in today’s edition of the Toronto Star to tout how wireless prices here are “typically lower than in the U.S.”. Check it out below: 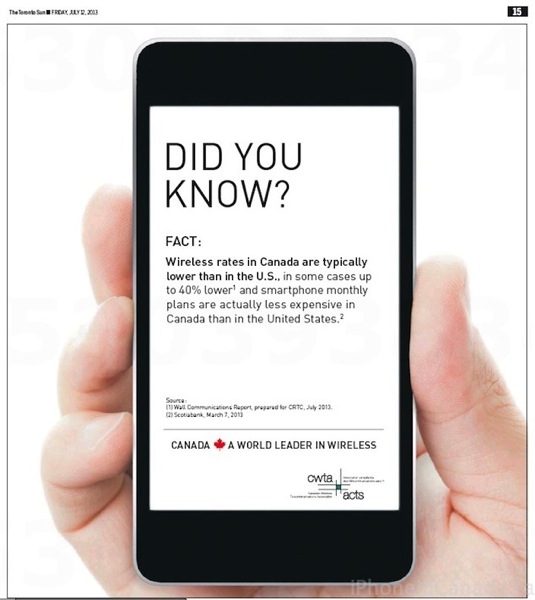 The ad refers to the Wall Communications report prepared for the CRTC for the ‘fact’ that says in some cases cellphone plans here are 40% lower here, while the mention of our wireless plans being less expensive than the U.S. is from the March Scotiabank report.

The Wall Communications report cited in the ad refers to prices from new wireless companies such as WIND, Mobilicity and Public Mobile, which offered lower prices by 19%, 14% and 39% for wireless subscribers in three categories based on low, medium and heavy users.

However, with so many different reports stating various conclusions about the state of wireless pricing in Canada, journalist Peter Nowak had a chance to speak with Gerry Wall, principal of Wall Communications. Nowak breaks down his issue with the Wall report:

The problem with the Wall report lies in interpreting it as comprehensive, because it isn’t. When the study says that Canada is “middle of the pack” in terms of pricing, that actually refers to only a very limited group of six compared countries: the United States, the United Kingdom, Japan, Australia and France. Three of those countries – Canada, Japan and the United States – are like the John Olerud, Paul Molitor and Roberto Alomar of wireless, in that they’re first, second and third in total monthly revenue gleaned per subscriber (points to anyone who recognizes the reference).

The U.K., France and Australia are more middle of the pack by that measure, according to the Bank of America Merrill Lynch Global Wireless Matrix, or the wireless industry’s bible. When additional countries are included in comparison – the Wireless Matrix compares 50, including 19 developed nations – Canada’s standing isn’t so middle-of-the-pack. Wall says he wishes he could include more countries in his comparison, but he simply isn’t given the budget to do so.

In the Wall report, smaller U.S. carriers such as T-Mobile (35 million subscribers) and MetroPCS (9 million subscribers) were not compared in the study, which might have changed U.S. pricing comparisons as these carriers offer competitive pricing. Wall said our newer entrants were included because the Federal government wanted to see how well they are doing.

Take these reports for what they are, but at the end of the day, ask yourself what you are paying for and receiving today versus three to four years ago. Are you paying more or less with your wallet?