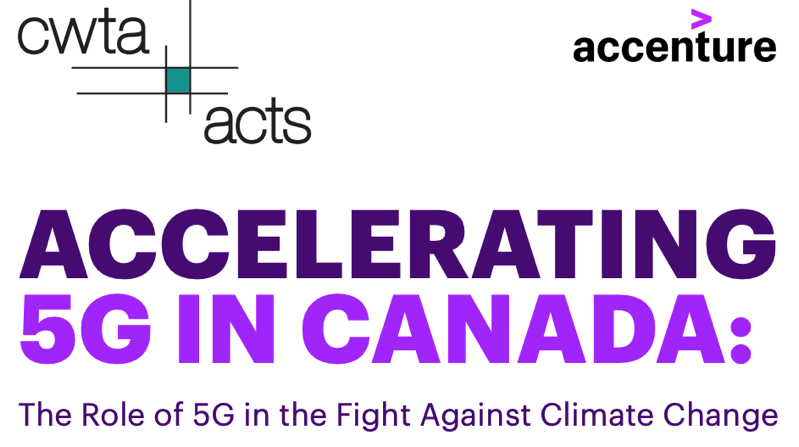 The Canadian Wireless Telecommunications Association (CWTA), the industry group for wireless companies in Canada, has released a new report it commissioned detailing how a faster 5G rollout can help fight climate change.

The 46-page report developed by Accenture is titled “Accelerating 5G in Canada: The Role of 5G in the Fight Against Climate Change.”

According to the CWTA, a faster 5G rollout will help Canada meet its greenhouse gas emissions goals, by enabling more efficient technologies that will reduce energy use and carbon emissions across various industries.

“This study reinforces just how significant the benefits of 5G will be for Canada,” said Tejas Rao, Managing Director and Global 5G Lead for Accenture’s Network Practice, in a statement. “While we know from previous reports that 5G will foster much-needed economic growth and could create up to 250,000 new jobs in Canada, this study highlights the important role that 5G will have in fighting climate change by lowering carbon emissions, improving energy efficiency and enhancing precision for monitoring the environment.”

“While we know that 5G will create jobs and drive economic growth, this new study shows that that 5G can achieve these results while also reducing Canada’s carbon footprint across multiple critical industry sectors. But delivering on the promise of a greener and more prosperous Canada requires policies that encourage private investment in network infrastructure and the support of all levels of government in reducing barriers to the deployment of 5G,” added Robert Ghiz, President and CEO of the CWTA.

Rogers, Telus and Bell already have 5G networks up, which continue to expand quickly ahead of upcoming 5G devices such as Apple’s iPhone 12, set to be announced next week. Rogers will charge $15/month for 5G network access in 2021, while Telus and Bell will not.

Rogers's claims that the company overpaid property taxes on its fibre-optic cables for the 2021 tax year by $2.2 million because of a B.C. Assessment error have been rejected by a B.C. judge — reports CTV News. The telecom giant was seeking an order of "mandamus," a legal term for a ruling that would require...
Nehal Malik
11 hours ago