Back in January, Fido marked down the 8 GB iPhone 3GS to $49.00 after a $50 bill credit. In an odd move, the company has now reintroduced this $49 iPhone 3GS promotion when other companies such as Telus and Bell are offering the iPhone 3GS for free.

For those in the market for a Fido 8 GB iPhone 3GS, whether you are upgrading or activating a new line, you may be eligible for a $50 “instant bill credit”, making the device cost $49.00 on a 3-year term.

If you start a new 3-year voice and data plan with Fido, at the retail location you pay $99.00 for the device. On your first or second invoice, you will receive a $50.00 bill credit.

The chosen plan must be either a separate voice and separate data plan or combo voice and data plan that equates to at least $50.00/month.

For upgrades/renewals, as long as you are eligible to renew on a 3-year contract with a voice and data plan, everything shows up on your first or second invoice. In other words, you will see a $99.00 charge and then a $50.00 credit on the invoice.

The plan must be either a separate voice and separate data plan or combo voice and data plan that equates to at least $50.00/month.

At this time, there is no expiration date for this offer. The promotion is on-going until further notice. 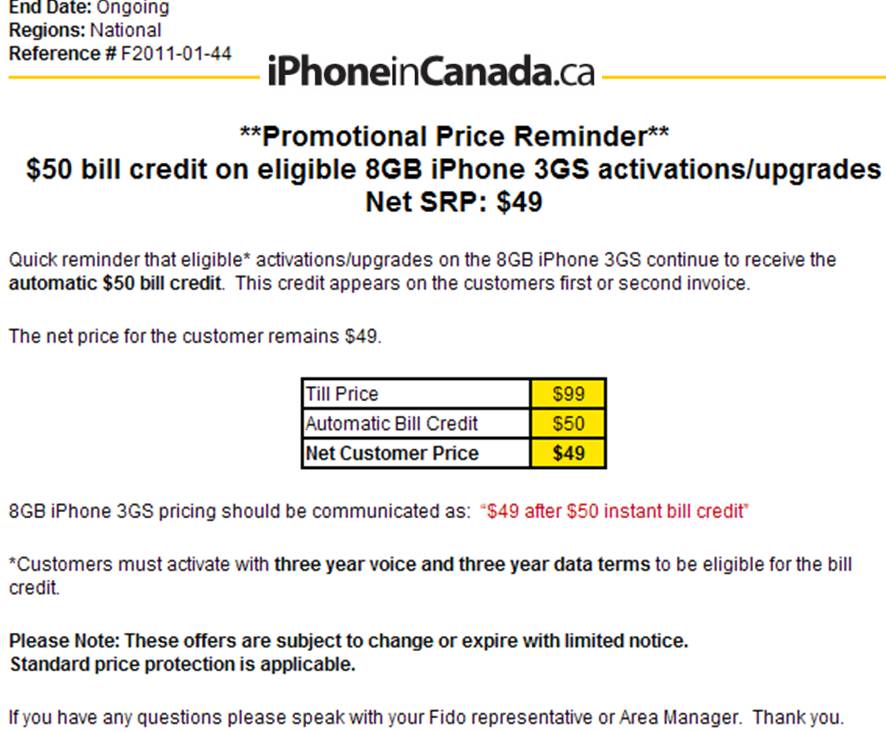