Well, I guess you can say we saw this coming, as the Canadian wireless industry likes to move in synchronized moves. Earlier today Telus launched their smartphone reservation system, and Rogers texted many of you to remind you of theirs.

Now, the Fido Reservation System has launched, which is similar to the Rogers Reservation System. Essentially you can just reserve whatever smartphone is coming out and skip searching stores and avoid the line ups. The system makes it clear it was used previously to help customers get their hands on the iPhone 4S:

Fido Reservation System – This is a new way for Fido customers to a reserve select wireless phone and have it shipped to a participating store of your choice.

Fido notes “Your reservation does not guarantee you will receive a phone as soon as it launches,” which seems weird doesn’t it? I mean, don’t you reserve a phone in hopes of getting one at launch?

The system also uses the same $40 deposit/cancellation policy like Rogers, and phones can be picked up in store or mailed to you “in approximately 4 days.” For those looking to use the system, your account must be in good standing. You can access the system via MyAccount, but as of now thing is available other than the HTC One S, which is useless to many of you.

Looks like everyone is starting to gear up for the iPhone 5, eh?

Update: Fido has also sent out text messages to customers reminding them of the reservation system, too (via @einsteinbqat): 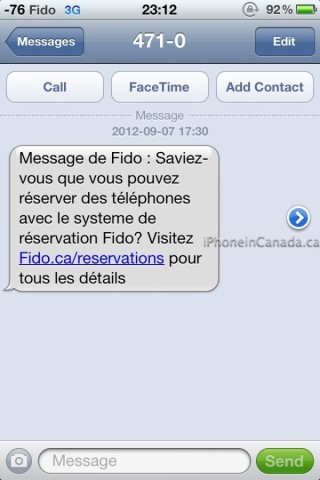 Opensignal released its Canada 5G Experience and Mobile Network Experience reports on Thursday, showing insight into the Canadian telecom landscape yet again. From April 1 to June 29, 2022, Opensignal analyzed the 5G user experience from Rogers, Telus and Bell. When it comes to the top 5G download speeds in Canada, Bell and Telus again...
Gary Ng
1 month ago