Fido, Virgin Plus Offering $35/12GB Promo Plan at Some Stores 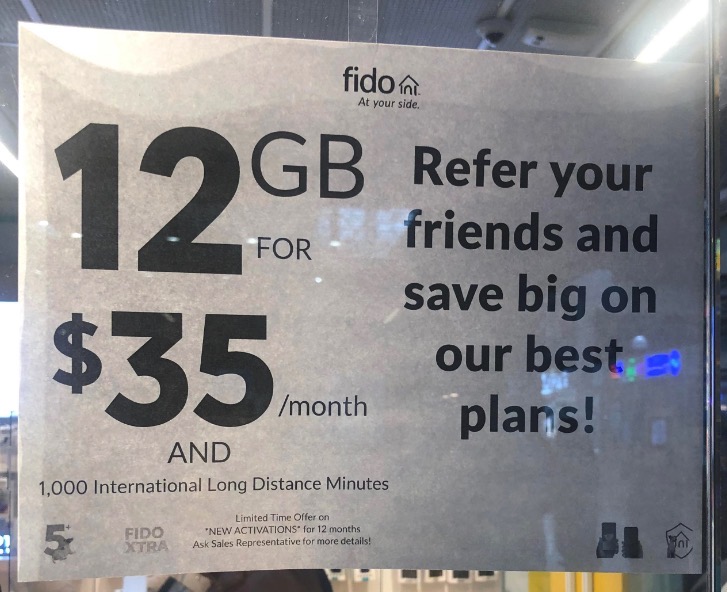 Looks like some Boxing Day wireless promos are coming in hot and early, as some Fido and Virgin Plus stores are offering up a $35/12GB plan for 12 months for new activations.

An ad posted outside the Fido store at Pacific Mall in Markham, Ontario, says you can get the $35/12GB plan for 12 months, which includes 1,000 international long distance minutes.

“Switched over to Fido yesterday at Pacific Mall (Markham). For the first year, 1000 [long distance] minutes included as well. The Virgin Mobile store next to it had the same deal,” said RFD user ‘TomatoCultivator’.

The second year of this plan will be charged at $40/month for 12GB.

During Black Friday in November, we saw some Fido, Koodo and Virgin Plus dealers offer a $40/12GB promo plan, which was $10 off the $50/12GB plan. Looks like this plan is back for Boxing Day, it appears.

Earlier this month, we saw Fido, Koodo and Virgin Plus all offering a $45/12GB plan in Quebec, so to get $12GB for $35 outside the province in Ontario, is not too bad of a deal.

Again, this promo may vary by province so let us know if your local ‘Big 3’ flanker brand store is offering some special deals in the comments below.