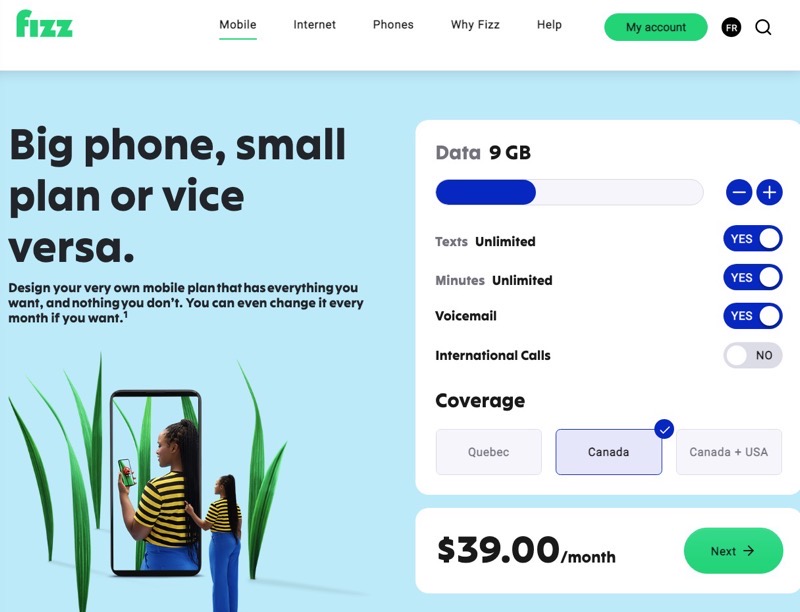 Videotron’s Fizz Mobile in Quebec has launched a new promotional plan, at $39 per month with 9GB of LTE data and unlimited nationwide talk and text, plus voicemail.

Fizz Mobile runs on Videotron’s LTE network and offers rollover data, so unused data moves over to your next month. Fizz Mobile is also available in Ottawa.

At $39 per month with 9GB of LTE data, this plan is cheaper than flanker brands from Rogers, Telus and Bell. Fido, Virgin Plus and Koodo offer a $50 plan with 10GB in comparison.

If you sign up under a friend for Fizz Mobile, you’ll also be able to get a $50 credit (it was $25), resulting in some more savings.

According to Quebecor, the parent company of Videotron, the company wants to expand its wireless services nationwide, to become a viable fourth player to rival the Big 3.

Here are the latest Canadian cellphone plan and device deals, plus other promos from wireless carriers such as Rogers, Telus and Bell, from our partner PlanHub. As always, the promos may change at the last minute, but here they are as of Wednesday, September 28, 2022. Check them out below… Bell Noticeable price changes: Get a […]
IIC Deals
15 hours ago

The Canadian Radio-television and Telecommunications Commission (CRTC) wants feedback from Canadians on the proposed price increases on basic TV packages, beyond mandated price caps. The CRTC said on Wednesday the request for comments comes “in response to an application filed by a group of television service providers to increase the price cap for the basic […]
Gary Ng
19 hours ago