Freedom Mobile customers started suffered from U.S. data roaming outages for well over a week, as users could not connect with U.S. roaming partner AT&T. The outage appears to have been fixed now, but it left numerous users without data roaming while on vacation or business down in the States.

Users took to social media to complain to Shaw-owned Freedom Mobile, such as the following on their Facebook page, where one customer cited having zero service for nearly a week, with no real explanation from the company: 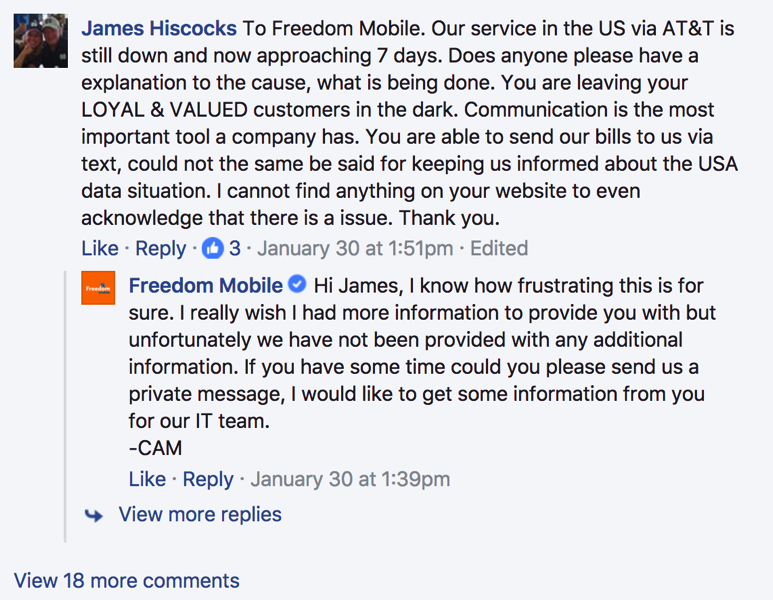 Meanwhile, on Twitter, one Public Mobile social media rep (named H.H.) ingeniously jumped in and started hijacking Freedom Mobile’s @replies, trying to convince users to switch over to the Telus-owned network. Freedom Mobile couldn’t handle it, and basically started tweeting back to @Telus and @Koodo for the shade being thrown.

Here are some of the hilarious back and forth responses: 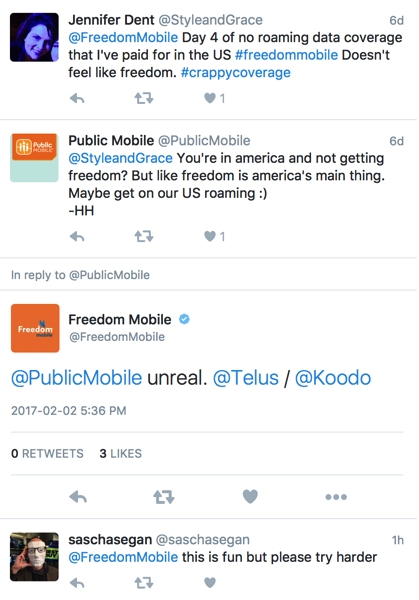 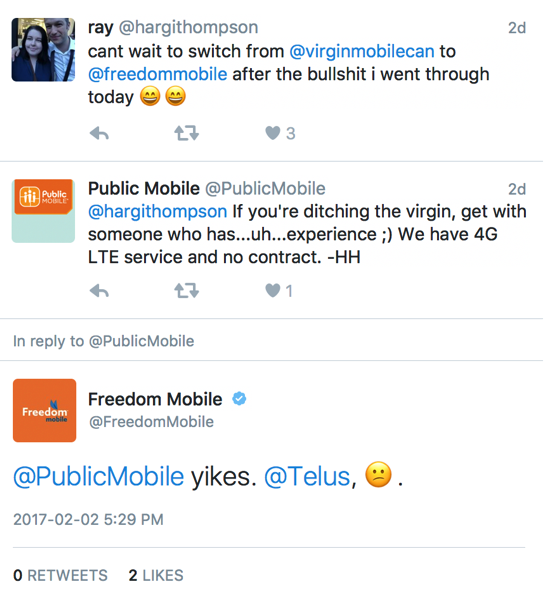 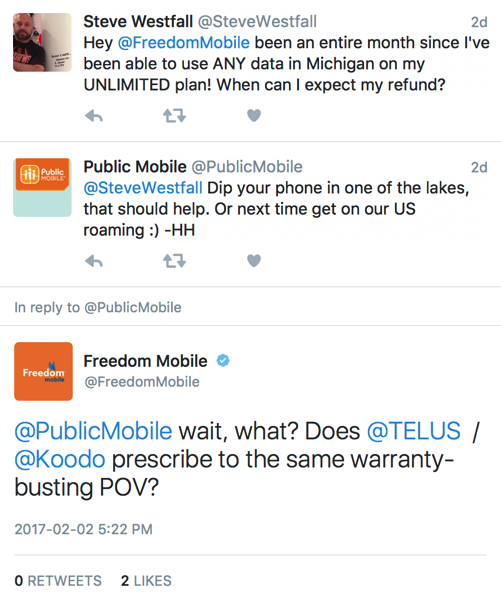 Some of these were pretty funny: 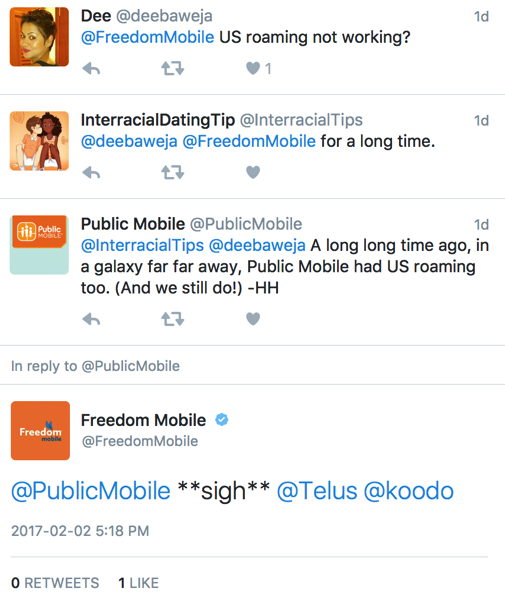 Instead of thinking of witty comebacks, Freedom Mobile was essentially trying to get parent company Telus and Koodo involved: 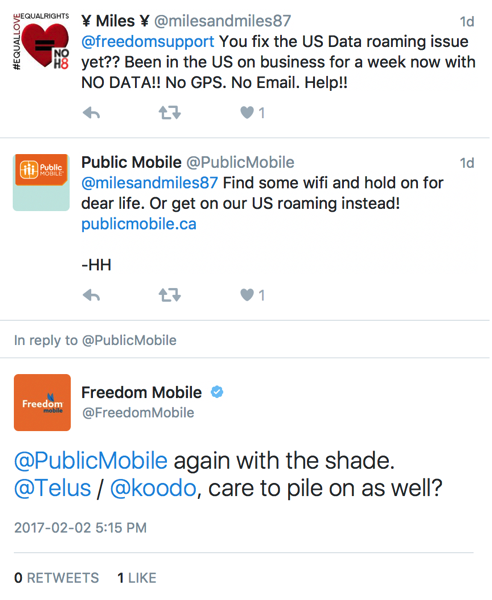 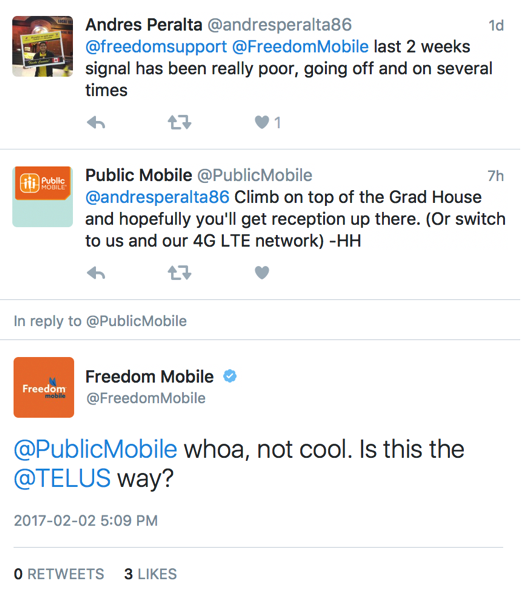 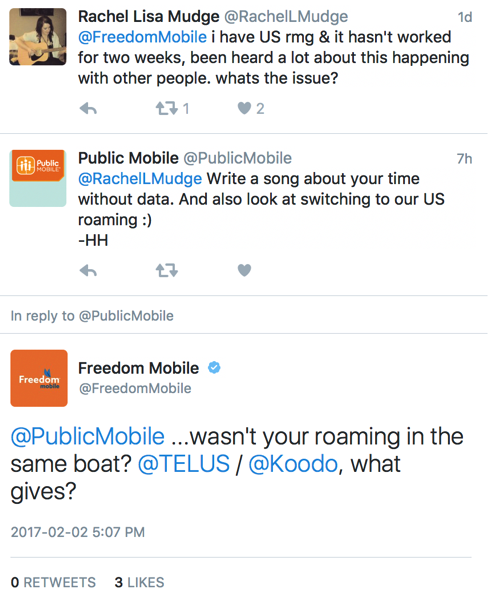 Come on Freedom Mobile, you need to work on that social media trash talk game like everybody else: 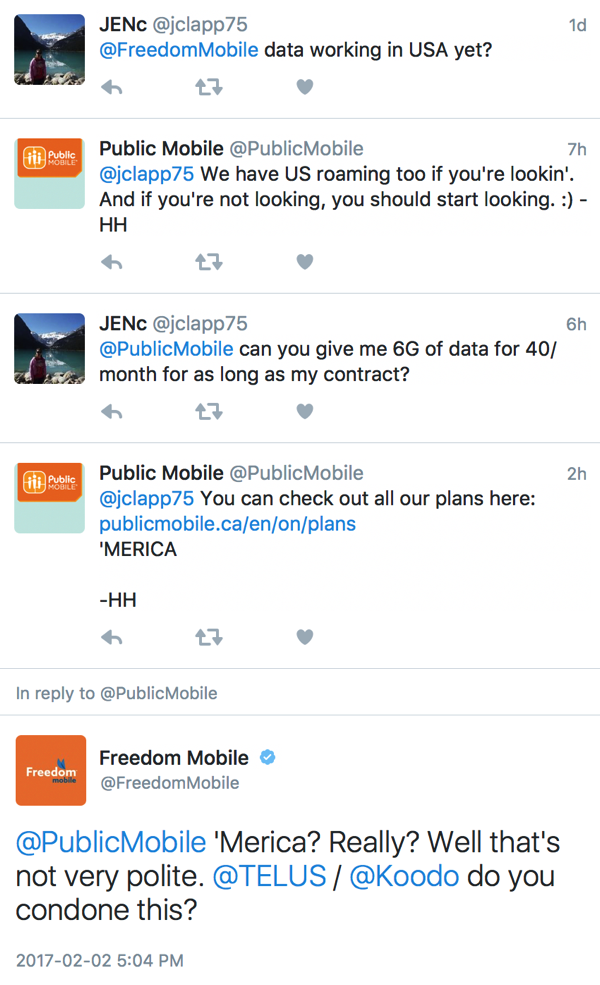 This was probably the best and only real response from Freedom Mobile, other than playing victim in the other tweets: 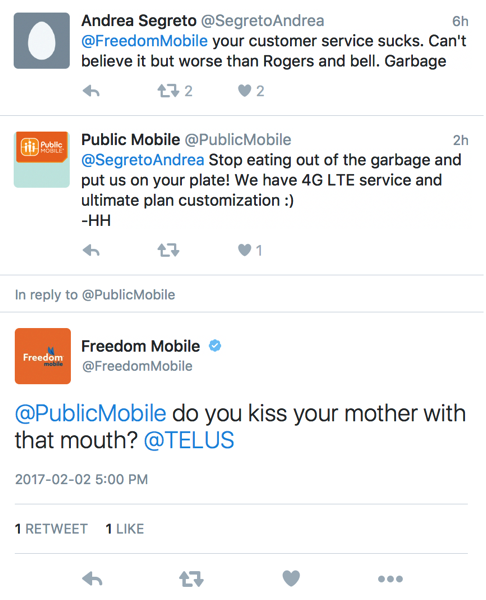 Anyways, we’re not trying to put down anyone here, but if you’re going to have a U.S. data outage, sounds like you need to work harder to fix it, because social media can be a cruel world.

If you were affected by downtime from U.S. roaming with Freedom Mobile, contact the company for credit, or file a complaint with the CCTS, as some of their customers have suggested on Facebook.

Anyone out there suffer data outages as part of Freedom Mobile’s U.S. roaming?

The Canadian government on Wednesday announced the results of a residual spectrum auction that concluded on January 17. Residual spectrum auctions are a way for Innovation, Science and Economic Development Canada to sell licences that weren't sold in previous auctions or were returned. Ottawa held an auction for the 3,800 MHz bands in June 2022,...
Nehal Malik
3 hours ago

MPs on the House of Commons' industry and technology committee on Wednesday expressed concerns about the impact of Rogers’ proposed $26 billion takeover of Shaw Communications on jobs, competition, and affordability in Canada's telecommunications sector (via The Globe and Mail). During another hearing on the long-embattled merger just a week before its January 31 deadline,...
Nehal Malik
6 hours ago

SaskTel announced on Wednesday it has started rolling out its 5G wireless network to the Battlefords, offering faster download speeds. The Saskatchewan crown corporation says it recently debuted its 5G network in the Town of Battleford, but expects all of Battleford and North Battleford to have full access by the summer of this year. “Our […]
Gary Ng
7 hours ago