Most Internet Providers Give Higher Speeds Than Advertised: CRTC

Last May, the CRTC asked Canadians to join their independent study to allow broadband measuring experts SamKnows, to compile and analyze broadband speeds across Canada.

Today, the Commission released their report, which concludeds the “majority” of Internet service providers offered higher speeds than advertised.

The study sought 6,200 volunteers, with over 3,000 participating in this study. The second phase will take place this fall, which will include more ISPs such as: Distributel, Nexicom, Primus, Teksavvy, VMedia, and Xplornet. More volunteers will also be part of this next phase.

Jean-Pierre Blais, CRTC Chairman and CEO, said in a statement:

“We are grateful to the thousands of Canadians who volunteered for the first-ever broadband measurement project of its kind in Canada. We would also like to thank the ISPs who contributed to the success of this innovative initiative. The results of the first phase of the project provide valuable insight on the real-world performance of Internet services across Canada. Stay tuned for details about the second phase of the project, which will be launched in the coming weeks.”

Data was collected from SamKnows Whiteboxes installed within consumer homes, from March 15 to April 14 of this year. Internet providers “largely met or exceeded their advertised upload speeds,” while TELUS’ 6x1Mbps DSL plan and Bell Aliant’s 7×0.64Mbps DSL service were the only ones to underperform, reaching less than 90% of their advertised rates, at 85% and 77% respectively. 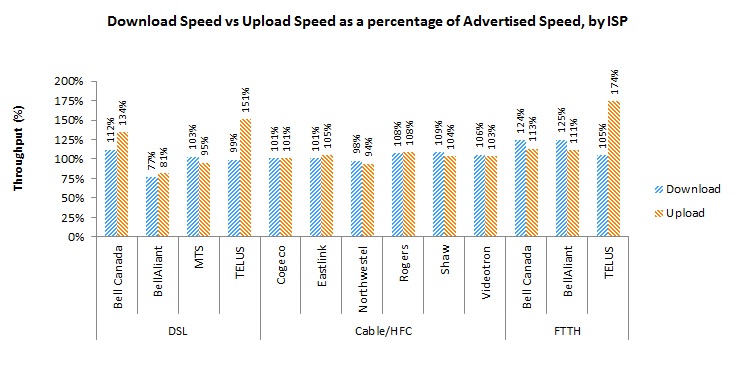 Bell reacted to the report, with Wade Oosterman, Group President of BCE and Bell Canada, and Bell’s Chief Brand Officer, saying “Canadians can be justifiably proud that our country’s broadband fibre and wireless networks rank among the fastest and best in the world.”

Manon Brouillette, President and CEO of Videotron, commented “The results released today show once again that we are giving consumers and businesses the speeds they expect and delivering on our promise to the customers who place their trust in us day after day.”

Are you getting faster speeds than advertised from your ISP? We’re on Shaw’s WideOpen Internet 150, and we have seen download speeds up to 175Mbps over Wi-Fi, at off peak times.