Rogers confirmed earlier this week they have started transitioning Mobilicity over to their 3G network, which means better coverage and speeds, plus the ability for unlocked, non-AWS smartphones to join the network.

If you were thinking of signing up for Mobilicity, you may want to hold off until their Black Friday promos start (BF is Nov. 27, but the poster claims Nov. 20). The plans reportedly leaked this morning on RedFlagDeals, with details coming from a Mobilicity dealer.

Last year, Mobilicity offered their $25 Unlimited Talk+ Text plan for just $15, which had the same details as above, but included North American MMS, for one day only. No word on whether these details are true, but we’ll have to wait and find out.

Update: Looks like the $15 plan is indeed legitimate (thanks @torontokris) and is pegged for tomorrow: 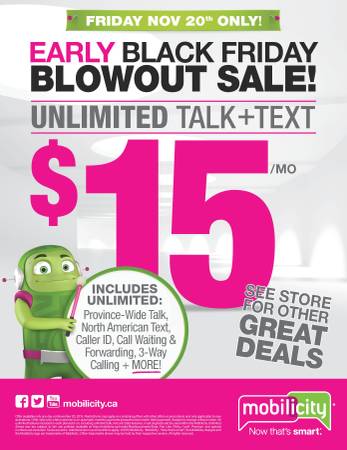