For only $28/month, get Unlimited Data, Talk and Text when you bring your number to Mobilicity! 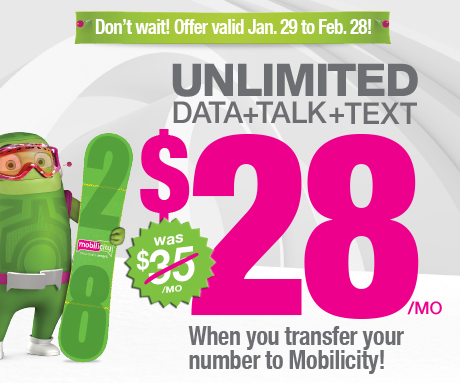 The catch in the fine print is the $28 price is only good for four months as you’ll get $7 credit applied to your bill each of those months. This isn’t exactly the hottest deal, as last March the wireless startup offered their $45 per month plan for $30. The move looks to be a retaliation move against WIND Mobile’s earlier promo offering six months of discounts to Mobilicity switchers.

If you have an AWS-enabled iPhone 5 or newer, it will work on Mobilicity’s network.

Mobilicity seeks to extend its creditor protection from January 30 to May 8, as it hopes to stay afloat and provide service for its 159,000 customers.

The carrier earlier this week declared it had secured funds to participate in the upcoming AWS-3 spectrum auction, where it will compete with WIND Mobile to snap up chunks of set-aside airwaves.

The Canadian Radio-television and Telecommunications Commission, the country’s broadcasting and telecommunications regulator, announced on Monday morning its website and phone lines are down for the count, in what appears to be an unscheduled outage. “Please note that our website, its related applications and phone lines are temporarily unavailable, we will update you as soon as […]
Gary Ng
8 hours ago