OpenMedia Details How ‘We Defeated Bell’ and Its Website Blocking Proposal

The CRTC yesterday rejected the Bell-led initiative to block piracy websites. FairPlay Canada as it was known, with its coalition of media companies including Bell Media, Rogers Media, CBC and more, had their application denied by the CRTC over jurisdiction grounds under the Telecommunications Act.

According to the CRTC, numerous opposition groups filed interventions to fight this website blocking plan, which critics said went against net neutrality rules.

Today, non-profit Internet advocacy group, OpenMedia, has detailed how “we defeated Bell”, in an email to its supporters, regarding their DontCensor.ca campaign.

OpenMedia says of the total 150,000 submissions received by the CRTC, over 70,000 of them—or about 47%—were done through the DontCensor.ca website, which made it easy for Canadians to file an intervention.

On February 28, 2018, in what the organization called their ‘Day of Action’, 50,000 submissions by Canadians were filed, led by OpenMedia, SumOfUs and LeadNow, while 34 businesses and organizations also led “efforts against censorship in Canada.” 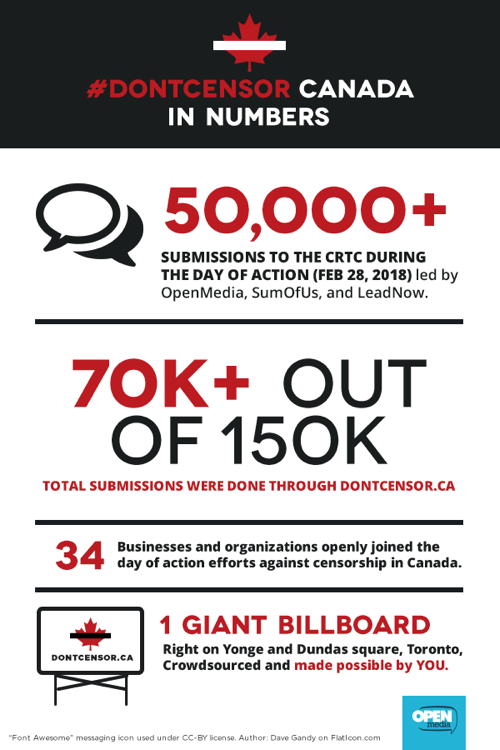 OpenMedia says they were also able to put up a giant billboard on Yonge and Dundas Square in downtown Toronto, led by crowdsourced funding from its supporters.

The victory over Bell’s website plan “was one of our biggest in recent history,” explains OpenMedia, but it says the fight is not over yet. Since the CRTC deferred the website blocking proposal over to ongoing reviews of the Copyright and Broadcast and Telecommunications Act, OpenMedia says that is “exactly where Bell is headed next—and we’ll be right there waiting for them.”

Canadians can now file a response to be submitted to the Parliamentary Standing Committee on Industry, Science and Technology (INDU), as part of its public consultation regarding the review of the Copyright Act which is up for review.

Fight Against Bell Not Over Yet, as Copyright Act Up for Review: OpenMedia

You can click here to fill out an easy form made by OpenMedia to share your views with the Federal government. Don’t want an ‘iPod tax’ on your smartphone? Let the government know about it.

OpenMedia concludes their email by saying, “We’re working to make sure the government hears us loud and clear: no matter where Bell tries to sneak in their censorship plan, we won’t tolerate it.”

The Black Friday plans are rolling out fast and furious for 2022 from flanker brands, Fido, Koodo and Virgin Plus in Ontario. Right now, a popular discounted $30/20GB Black Friday plan for bring your own devices is being offered by all three flanker brands. Originally the plan was available from Koodo with only 15 months […]
Gary Ng
10 hours ago

Rogers, Telus and Bell have launched new Black Friday plans today for bring your own device (BYOD) customers. The Rogers Infinite Essential plan offers 100GB of data for $75 per month (normally $85) with access to the 5G/5G+ network and speeds up to 250 Mbps. Telus is offering an $85 plan with 100GB data at […]
IIC Deals
14 hours ago