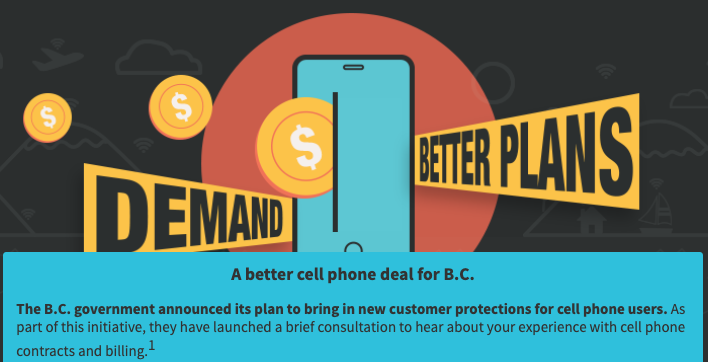 Last month, the government of British Columbia launched a new public questionnaire to seek public input into cellphone bills, part of the province’s plan to lower costs for better affordability.

Now, Vancouver-based non-profit and consumer advocacy group, OpenMedia, has launched their own petition detailing specific changes they recommend to the provincial government to improve wireless services, plus increase consumer protections and transparency.

“We will deliver this petition alongside OpenMedia’s policy recommendations to the B.C. government,” explains the organization.

The letter begins by saying, “People in Canada pay some of the highest cell phone bills in the world and are often subject to predatory contracts and misleading advertising.”

While dealing with telecoms is a federal matter, OpenMedia concludes to say, “We urge the B.C. government to pressure the federal government to take action to ensure everyone has access to affordable and reliable wireless services.”

Last week, the federal government announced it had directed the CRTC to “drive down” wireless prices with competition, suggesting change were coming.

Recently, Canada’s Big 3 wireless players, launched new ‘no overage’ data plans marketed as “unlimited”, with plans starting at $75 for 10GB of data, with throttling of speeds once initial data buckets are used up. Some have suggested these plans have surfaced one step ahead of any government plan to mandate competition or pricing.