Canadians need more choices, lower prices, and better wireless services, the government’s slogan says. Of course, things may look different depending on your perspective: incumbents obviously deny such a problem (they control more than 90% of the market), but the consumers’ side of the story doesn’t match that of the incumbents. And now the PIAC has released a backgrounder, “Wireless Services in Canada: Why Canadians Deserve Better,” to communicate the need for more competition with numbers and facts, and not just empty words.

So what the backgrounder reveals is that Canadian wireless carriers charge some of the highest prices in the world and rank high in revenues amongst OECD countries, while ranking low in wireless penetration compared to the same OECD countries.

To put that into numbers: A 2002 OECD report showed that a number of European countries had mobile adoption rates of over 70%, while Canada was at 30.9%. According to reports covering wireless adoption rates, two years ago the Canadian wireless penetration rate was at 79.4%, while in Finland, for example, it was 160%.

Using market share data from the CRTC Communications Monitoring Report 2013, the wireless industry in 2012 had an HHI of 2724. (Note that this HHI would be slightly higher, as HHI includes the sum of the squares of the market shares of the 50 largest firms, but this calculation only includes the 3 largest). This suggests a highly concentrated threshold and a tight oligopoly. The Canadian wireless retail market thus has extremely high HHI scores, both nationwide and in particular in some regional markets despite regional competitors, as demonstrated below: 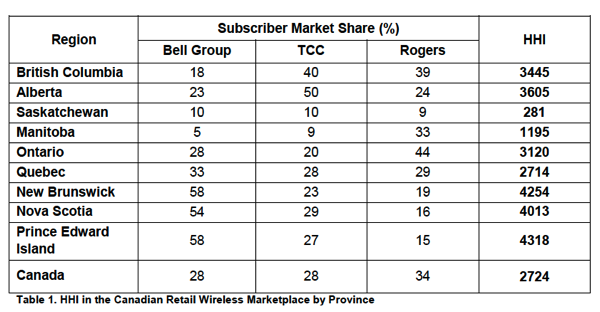 The other standard measure of market concentration, the four-firm concentration ratio (CR4), is at about 90 or higher in all Canadian markets, meaning the four largest competitors have 90%+ market share (a result of high market shares for the Big Three and, in certain provinces, a wireless subsidiary of the local incumbent wireline telephone provider). Therefore, on traditional structural measures of market concentration, the Canadian wireless market is highly concentrated and therefore very possibly not competitive, or at least not competitive enough to satisfy policy goals of dynamic competition that should produce lower consumer prices

What this means is that further measures are necessary to promote more competition. The government has taken such steps: It introduced a bill to cap domestic roaming charges and announced two new wireless spectrum auctions, but more importantly — the study highlights — it realized that Canadians deserve better.

Here are the latest Canadian cellphone plan and device deals, plus other promos from wireless carriers such as Rogers, Telus and Bell, from our partner PlanHub. As always, the promos may change at the last minute, but here they are as of Wednesday, September 28, 2022. Check them out below… Bell Noticeable price changes: Get a […]
IIC Deals
21 hours ago

The Canadian Radio-television and Telecommunications Commission (CRTC) wants feedback from Canadians on the proposed price increases on basic TV packages, beyond mandated price caps. The CRTC said on Wednesday the request for comments comes “in response to an application filed by a group of television service providers to increase the price cap for the basic […]
Gary Ng
1 day ago