Last year, law enforcement agencies were less interested in Rogers’ customer data, according to the carrier’s third annual Transparency Report. As it turns out, there were about 27,000 fewer requests year-over-year, although the press release notes that this fluctuation was mostly due to external factors such as the number of investigations that need to be conducted by law enforcement agencies. 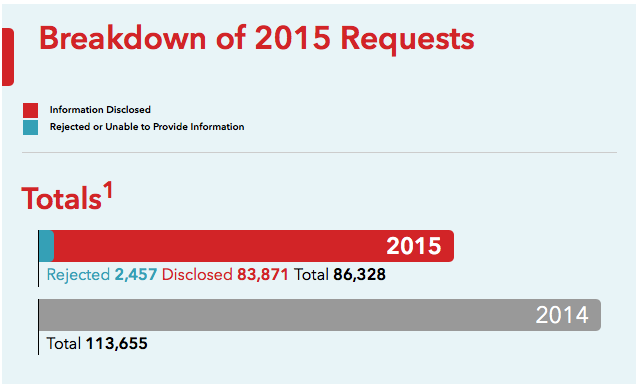 The third annual report breaks down the number of times Rogers disclosed information, refused to provide information, and didn’t provide any data. The carrier also notes that it successfully fought a request in court that involved the data of more than 30,000 people, which they considered too broad a request.

We take active steps to safeguard our customers’ information and defend their privacy rights. As we mentioned in last year’s report, we now require a Court Order/Warrant (or equivalent) to process customer name and address checks and child sexual exploitation assistance requests, unless there is an immediate risk as outlined in the Criminal Code. As a result, both of those categories are at zero for 2015, and those types of requests are now reflected under other categories, the Rogers press release states.

You can access the full report by visiting Rogers’ dedicated microsite.