PCMag has released its 10th annual Fastest Mobile Networks Canada results, this time for 2022. This is where the publication drives across Canada to test wireless speeds and coverage with its array of devices.

For 2022, the fastest mobile network crown goes to Bell, seeing maximum download speeds of 1373 Mbps, versus Rogers in second place at 944 Mbps and Telus at 824 Mbps.

It’s worth pointing out Bell’s win was achieved thanks to its 3500 MHz spectrum used in many cities for “5G+”. The same goes for Rogers and its 3500 MHz 5G speeds.

Telus told PCMag it does have its 3500 MHz 5G network, but there is no device firmware for Android phones to access the faster network; thus PCMag was unable to access the Telus 5G+ network for its testing. Telus also has speed caps on its premium plans, unlike Bell and Rogers.

The introduction of 3500 MHz 5G has helped Rogers the most and allowed it to tie Telus with a speed score of 91, while Bell earned 98. Bell won 22 of our 31 tested areas, with its investments in southern Ontario paying off.

PCMag points out it did not take the major Rogers wireless and internet outage into consideration for its rankings and dock points, but “considered it.”

Check out the results below: 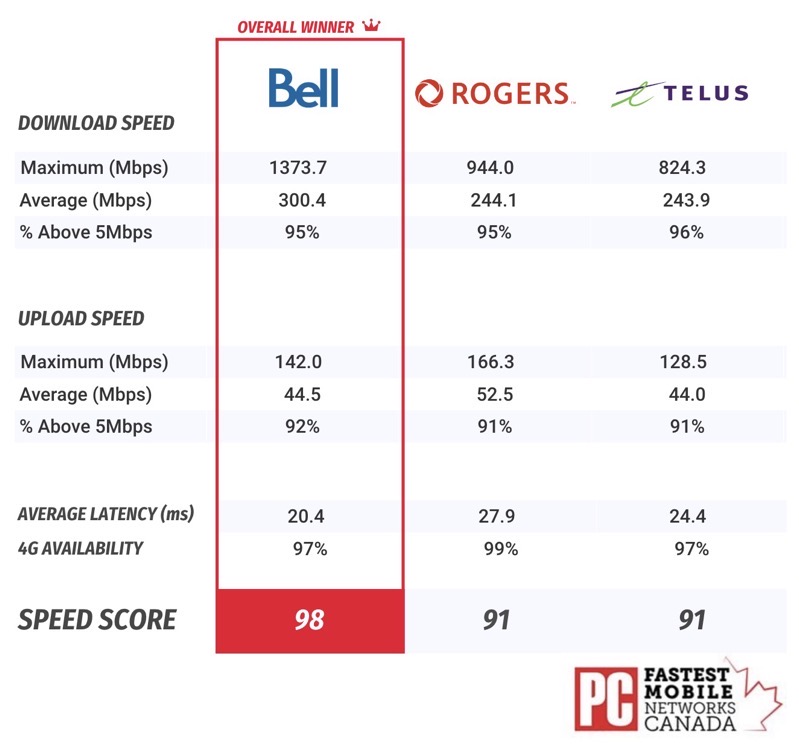 Here, we can see how 5G+ has helped propel average download speeds for Rogers: 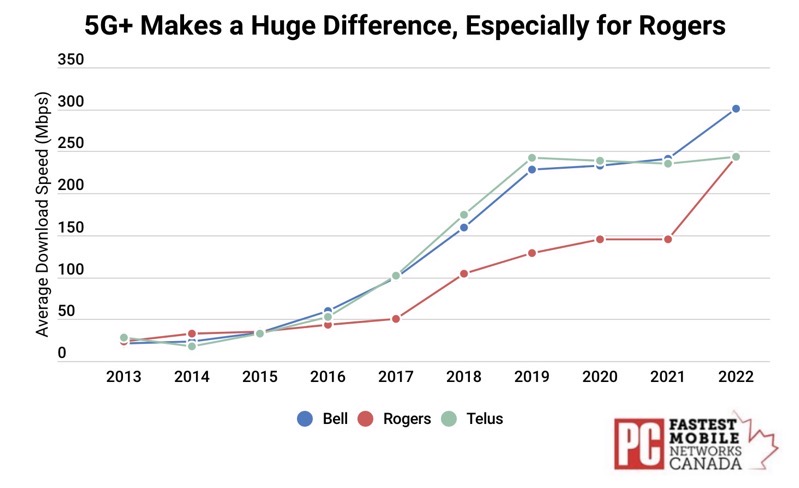 “I am so proud that Bell is recognized as Canada’s fastest mobile network for the third year in a row, and I’m especially proud of the Bell team that puts their energy and effort into ensuring that Canadians have the best network experience. We know that our customers depend on us to deliver a network with great coverage, reliability and some of the fastest speeds in the world. We’re now taking our 5G service to new heights with 5G+, and we’ll continue to advance our network to connect more Canadians every day,” said Claire Gillies, EVP Marketing and President Consumer, Bell, in an issued statement.

Those seeking 5G unlimited plans from the ‘Big 3’ require a minimum $85/month plan.