Most wireless carriers will accept your used or broken cellphone for recycling in store. Turns out one Calgary woman thought this was the case but was surprised to discover her damaged blue iPhone 5c—which she recycled at a Rogers location in Beacon Hill—turned up on eBay, according to Global News. 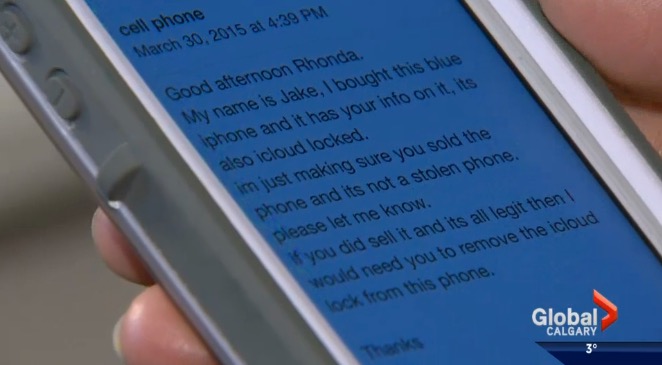 Rhonda Anderson bought a new iPhone from Rogers in February after she dropped her old one and it broke into pieces. She was told by a manager her old iPhone could be recycled in the store:

“He said Rogers has a recycling program and I said, ‘Perfect.’ So he lifted up a little white bin and I placed my broken phone in there.”

Now here’s where it gets interesting: a month later “Jake” contacted her via email and said he purchased her iPhone off eBay and wanted to know if she could unlock and delete her iCloud account on the phone, as the buyer wanted to make sure it was not a stolen phone:

“It was advertised as: ‘The screen is broken, phone works, it’s on the Rogers network, sold as is.’ I’ve got text messages, photos of my family…my life is on that phone,” said Anderson.

When Anderson complained to Rogers, no one responded until Global News contacted the company. The wireless carrier apologized and said it was investigating the situation:

“We have strict policies in place with regard to safeguarding customer information,” said a statement from Rogers. “Our policies weren’t followed and that is unacceptable. The store understands how serious this is and they have taken the appropriate disciplinary action with the employee.”

A new store manager said the previous Rogers employee no longer works at the location. The carrier says it is now reviewing its policies.

If you’re ever selling your iPhone, make sure you wipe it cleanly going to:

This sounds like an isolated incident of a rogue employee selling recycled phones. As for the iPhone, it sounds like Anderson may not have had a passcode setup, which is how the buyer found her information—and was unable to delete the iCloud account (as it requires a password confirmation).