Just like after last year’s Rogers outage in April, scammers are again targeting customers with fake text messages, claiming action is needed to get bill credits.

Rogers warned customers about fake scam texts going around earlier this week. “We are aware of scam text messages being sent claiming to offer credits in the wake of yesterday’s service interruptions. We will apply the credit proactively to your account & no action is required. If you receive a suspicious SMS, please forward it to 7726 (SPAM),” said the company.

But now the CRTC has taken notice of these scam texts, warning Rogers customers on Tuesday.

“There are reports of phishing messages going around, claiming to be from Rogers. These messages ask you to reply or click a link in order to receive a credit. This is a scam! Do not reply or click any links. If you receive a suspicious SMS, please forward it to 7726 (SPAM). Then, delete the message and block the number. If in doubt, contact the company directly by looking up their customer service information,” said the CRTC. 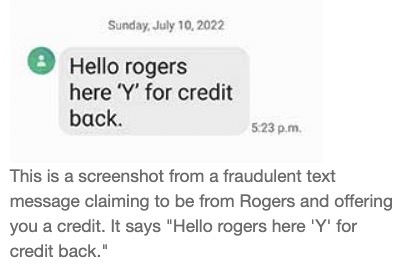 ⚠️ONGOING SCAM – ROGERS OUTAGE⚠️
Do not click on the web links claimed to be sent by Rogers for reimbursement. Credits will be made proactively on your monthly bill, as stated by the company.
This will NOT be done via text!
Examples of texts : https://t.co/kJCk9RmHaJ

Scammers send these fake texts that include links to phishing sites, asking users to enter their personal or financial login details which are then stolen.

We reported earlier this week Rogers will be offering two days of service credits for the nationwide outage that crippled the INTERAC network, emergency services, along with cellphone and internet services for home and business customers.

A class action lawsuit in Quebec is seeking $400 per customer over the nationwide outage.

François-Philippe Champagne, Canada’s Minister of Innovation, Science and Industry, met with the CEOs of Rogers, Telus and Bell yesterday and ordered the ‘Big 3’ to create a network safety plan within 60 days.